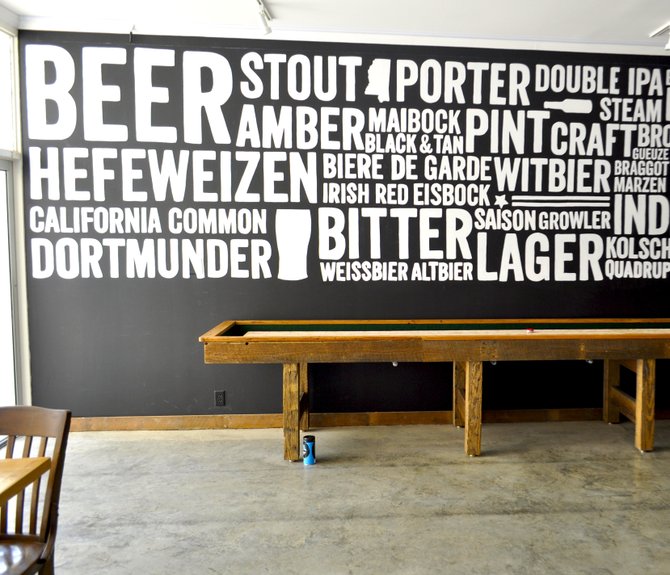 Fondren Public opens Sept. 2, and is sure to bring out beer lovers from Jackson and the surrounding areas. Photo by Trip Burns

If you see the hashtag #followthejug floating around social media, it means something sure to make beer lovers salivate is coming.

The catchphrase and hashtag is the brainchild of a small group of Jackson investors. They are using it as a social media campaign to get word out about their new bar and grill opening Monday in Fondren. "The phrase refers to a small jug—a growler—that is refillable with any kind of the 24 beers on tap that leads our new offerings of craft beer," says Andrew Kehoe, the general manager of Fondren Public. The Growler costs $5 and refills start at $12. It is sealed onsite to be taken out and enjoyed later.

Fondren Public is nestled between the circa URBAN ARTISAN LIVING boutique and the Zoubir Tabout Antiques and Interiors store in the Rainbow Co-Op shopping center on Old Canton Road. It officially opens Sept. 2, and is sure to bring out beer lovers from Jackson and the surrounding areas. "We are looking forward to offering something that Jackson presently doesn't have with respect to craft beer. We're planning Fondren Public to be informative and interactive with an up-and-coming community like Fondren to grow and increase knowledge of craft beer of beer drinkers," Kehoe says.

"We also have a new, and possibly one of the only, bocce (ball) courts located outside to attract people who want to have fun while enjoying a great brew."

Bocce is an Italian game that is similar to lawn bowling, but the ball can be thrown into the air in an underarm motion, or rolled. The game is played by two or three players or by teams of two, three or four players. Players are required to score seven to 13 points. The team who lands a spherical shaped ball closer to the Jack, which is a smaller ball called a boccino, wins.

The food menu boasts generous numbers of snacks, sliders, salads and "big bites." Specialty snacks include boiled peanuts flavored with cumin, sweet heat and cayenne. For those of us who like it hot, there's fried pepper jack cheese with candied bacon and sweet Tabasco glaze. The slider selection includes beef, chicken, or pulled pork. Herbivores can try the veggie slider stuffed with eggplant, sauteed onions and a truffle white bean spread.

For those with heartier appetites, Fondren Public's kitchen manager Matt Roberts created "big bites," which include a Cajun corn dog, BLT, and a fried chicken & waffle taco served with a honey glaze. Other treats include an arugula salad and tomato salad drizzled with a choice of ranch dressing or homemade vinaigrette.

The owners of Fondren Public (2765 Old Canton Road) are a group of young professionals from Jackson and Boston. For more information, visit Fondren Public's Facebook page or call 769-216-2589. The pub's grand opening is Sept. 2 at 4 p.m.