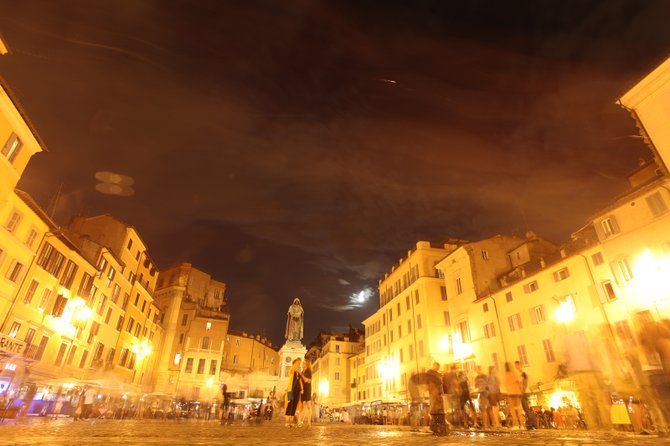 The Campo De’ Fiori area of Rome is a haven for foodies. Photo by Courtesy Flickr/Frozenchipmunk

I never fully understood the context of the phrase "When in Rome, do as the Romans do" until I went there myself. Countless weeks leading up to the maiden voyage couldn't prepare me enough for my holiday abroad. Anyone traveling to far-off new places has to make plans, which for me included packing the most minimal of bags. That came down to four pairs of shoes and enough outfits for 11 days—all in a rolling carry-on.

I also had to obtain a passport and a handy "Rick Steves' Italy" tour book, exchange currency and my agenda. Sure, I had my sights set on wonders of the artistic and historic, but my plan was purely carnal and gluttonous and straightforward: to consume every single thing I encountered.

Rome is pulsing with a great balance of preserved, romantic decay and cosmopolitan gloss. People rush everywhere, and everything is urgent, all against a backdrop of unearthed remains and ruins still intact from hundreds, if not thousands, of years ago. Newly constructed boutiques and storefronts sit across the street from a recently discovered and excavated site of an ancient bath house. The duality of the city is amazing and quite impressive. Everything is preserved and accessible to those who want to explore Rome.

That meant museums and shopping, churches and comic books, boutiques and ruins. Exploring made me hungry—not from the physical exertion of continuous walking and stair climbing, but because it requires a lot of energy, and I like to eat.

Tons of touristy spots cater to those who want the standard slice of pizza and a Coke, but going on a suggestion from my awesome tour advisers, Bob and Martha Pennebaker, I came upon a bohemian and colorful Roman neighborhood called Campo De' Fiori. It is fun and vibrant, with open-air markets, clothing boutiques and restaurants all jumbled together in one funky puzzle. I fell in love.

We found a cute spot called Ristorante Il Gabriello, where we rested our tired limbs and ate some good food. We could order red or white house wine by the liter, and waiters zoomed it out to the table. The menu is divided into courses, and I didn't want to set the tone for my trip by ordering something safe and "light." I wanted my first meal in Rome to be reflective of the attitude I had adopted since touching Roman ground: insatiable, robust and full.

I found it in a bowl of bucatini pasta (hollow spaghetti noodles), tossed in crushed tomatoes, caramelized onions, pancetta and red pepper flakes. Perfect. It was a simple blend of straightforward, quality ingredients, with flavors melding while also standing out in each morsel. Each bite of pasta was wrapped perfectly with just enough sauce. The toothiness of the pasta, the caramelized sweetness of the pancetta and onions, the acidity of the tomatoes, and the slight bite of the red pepper flakes and garlic made this dish everything. And at around 15 euros, or about $20, for tomato bruschetta, a pasta of your choice and a glass of wine, it definitely made a good impression on me and my budget.

Making my way through Rome, my voracious appetite was continuously fed. I stayed at the Hotel Rosetta, nestled on the Via Cavour—one of the main arteries of Rome, lined with shops, cafes, hotels and within walking distance of the major sights. I could easily see the tremendous Colossuem from my hotel window. Strolling along the Via Cavour helped to satiate my appetite for all things lovely, which included consuming as much gelato as possible, which I did, at Gelateria La Dolce Vita.

My favorite was stracciatella (dark chocolate laced in a vanilla-cream base). If you're feeling fancy, I would suggest the balsamic or the pistachio flavors.

I saw breathtaking vision after breathtaking vision. The sparkle in my eye dimmed in comparison to the wonder of gazing at the ceiling of the Sistine Chapel or the dome of the Pantheon. The soreness of feet and knees subsided into obscurity as I climbed towers and steps to see out onto the city itself.

DO AS THE ROMANS DO