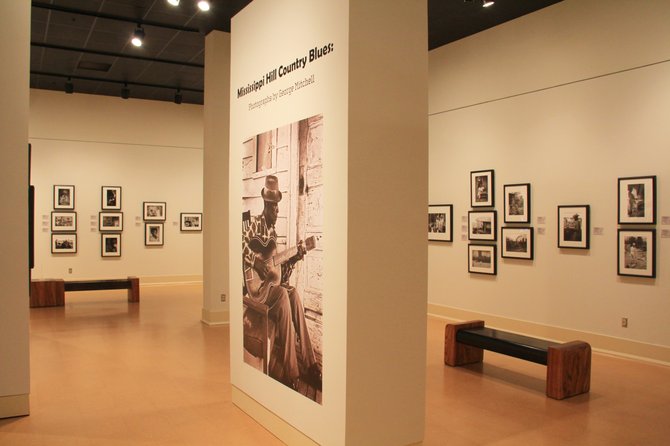 The Mississippi Museum of Art is showing many of George Mitchell’s historic photos in a special exhibit. Photo by Courtesy Julian Rankin

George Mitchell's famed 1967 field trip through the hill country of north Mississippi introduced many previously obscure blues legends to the world. He chronicled it in his 1971 book, "Blow My Blues Away." Later, various record labels released field recordings Mitchell made of musicians such Mississippi Fred McDowell, R.L. Burnside and Joe Callicott, before Fat Possum Records anthologized the records in the box set, "The George Mitchell Collection."

The University Press of Mississippi has published a new collection of photographs and interviews from the period, "Mississippi Hill Country Blues 1967." Mitchell will be in Jackson to sign the book Aug. 21 at Lemuria Books. Meanwhile, selections from the book, along with an additional 75 photographs, are on exhibit at the Mississippi Museum of Art through September.

The impetus for the new collection, which contains many previously unpublished photos, along with some from "Blow My Blues Away," came when Mitchell was packing up to move from Atlanta to Florida a few years ago. He was digging through boxes of negatives when he discovered one he didn't remember of R.L. Burnside sitting on a tractor with his children.

The old photos brought back memories of his trip and urged him to dig deeper. One of those memories was of his first encounter in Mississippi. Mitchell had heard that Fred McDowell lived in Como, and following his usual custom, pulled into the first gas station he saw to just start asking around.

"We got off in Mississippi in Como at Stuckey's," Mitchell said in a phone interview. "I asked the man who was washing our windshield if he knew Fred McDowell. He said, 'Yes, I do.' And I said, 'Do you know how we might find him?' And he said, 'You're looking at him.' He was pretty famous at the time, traveled through Europe and everything, but still needed a menial job to  support himself."

McDowell invited him over to his house, where an impromptu blues picnic took place, and Mitchell began taking photos and setting up recording equipment.

"The only kind of problems we had was when they had the picnics and we were probably the first white people to go to one," Mitchell said. "I set up my recorder, and the mic cord got cut a couple of times.

"Everybody was drunk and didn't know me, and pinching my wife's ass. Then Fred McDowell showed up, and I told him, and everything was cool. Boom, no more ass pinching. No more cord cutting, or anything like that. Everybody was happy to be photographed and dancing in front of the camera. People just pulled us in and welcomed us in and helped us so much."

Poring over these photographs and memories, Mitchell soon realized he had enough material for a new book. With the lapse of 40 years, Mitchell felt like he was discovering his own work for the first time.

"I was young then, and your tastes change," Mitchell said. "But there were many excellent photographs that I'd never used before and had forgotten about. All of a sudden, we were seeing photographs as if for the first time. To see those things is quite a discovery, that's what it  felt like."