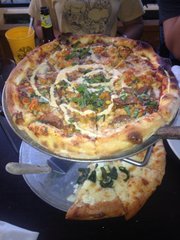 After the overwhelming popularity of last August’s pizza pop-up, guest chef Jesse Houston and Sal & Mookie’s are teaming up again for round two.

Pizza is a big deal. Sometimes folks' love of it borders on a religious fixation. They debate endlessly about what makes the perfect slice. This weekend, chef Jesse Houston will add several new contenders to that conversation, in his return to Sal & Mookie's for the second Pop-up Pizza in Jackson, fittingly titled "The Empire State Strikes Back."

The name combines a Star Wars pun with the idea of New York (the type of pizza Sal & Mookie's churns out) and refers to this being the second pizza pop-up Jesse Houston has hosted at Sal & Mookie's. The event's success last August definitely spurred on plans for a second one. "Last year was one of our (Sal & Mookie's) biggest sale days," says Liz Lancaster, the event-planning organizer for the restaurant.

The event isn't memorable just for its profit, either. "Out of all the pop ups I've done, l've had more people come up and tell me this is their favorite one," says Houston, a JFP food blogger (jfp.ms/foodblog).

Houston previously fought the war against Domino's and Pizza Hut while working as a chef in Dallas, Texas, but moved into other cuisines and away from pizza when he moved to Jackson. The first pizza pop-up, PM Pizza (in conjunction with Parlor Market) was a chance for Houston to get back in the dough game.

Now Houston returns, collaborating once again with BRAVO! chef Karl Gorline to mix up pizzas based on food you might never imagine in pie form. Houston is really excited about the Tom Kha pizza. "It's a take on a Vietnamese soup called Tom-Kha-Gai," he says. "It (has) coconut with a little bit of curry and garnished with some cilantro and Thai basil ... It's going to have lemon grass shrimp on it and bean sprouts."

Gorline and Houston plan to bring some popular menu items from last year as well, such as the crawfish boil pizza, with mozzarella, crawfish tails, andouille, corn, crab boil aioli and fresh basil. Returning as well is the Pizza Sandwich, which is a pizza with another pizza on top. This idea was spawned when Gorline and his friends would get particularly famished and order a similar concoction. Like the rest of the event, though, the pizza sandwich is appearing in a more extreme incarnation.

"Last year we had the Mona Lisa pizza sandwich from Karl Gorline. This year he is giving us another pizza sandwich, but this one will be like a cheeseburger, with all of your traditional cheeseburger toppings," Houston says.

All pizzas are the size of the Sal & Mookie's small 14-inch pie, and the prices will be fixed based on toppings.

An exciting item is a collaboration between Houston and Lucky Town brewery: pizza-flavored beer. "We made a wheat beer and brewed it with sun dried tomatoes, chili flakes and oregano," Houston says. This beer will only be available at the event.

If you miss the April 29 pop-up, you can eat Houston's creative style of food on a second Star Wars-named event: his "May the Fourth Be With You" breakfast at Sneaky Beans, on national Star Wars Day, May 4.

The event is a collaboration among Houston, Campbell's Bakery, Sneaky Beans coffee shop and Beanfruit Coffee. The chefs took the theme all the way to the menu with cinnamon rolls shaped like Princess Leia's hair buns, R2-tea cakes, eggs-wing and a Beanfruit roasted coffee called Java the Hutt that, like the pizza-flavored beer, will only be available at this event. For extra festivity, a costume contest is in the works and the Mississippi Rancor Raider, a group of Storm Troopers, will hang out at the event.