Jonathan Lee on the Defensive Over Business Judgments (Plus Audio) 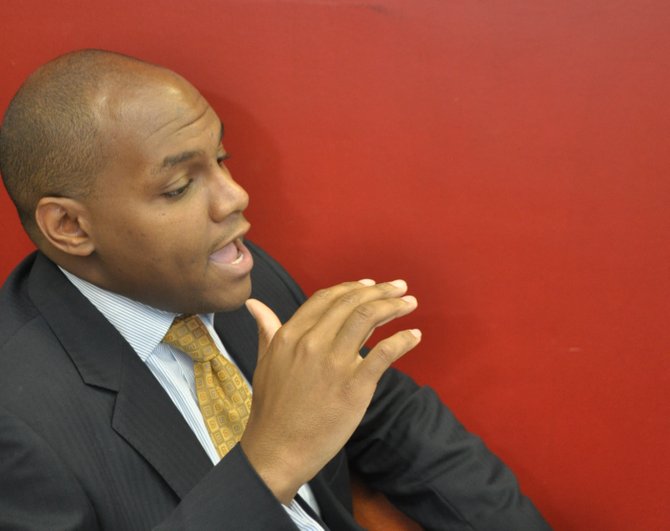 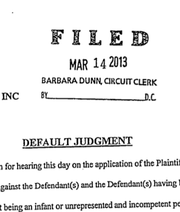 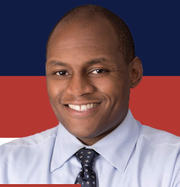 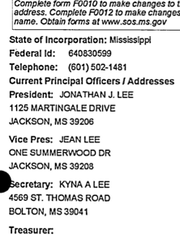 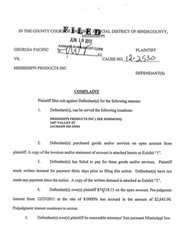 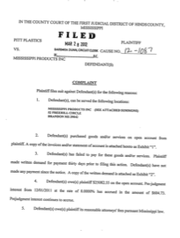 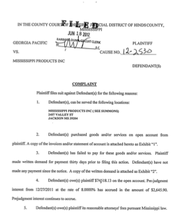 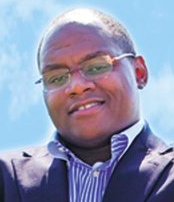 Lee's interview is the first in JFP's series with 2013 Jackson mayor candidates. They will be posted at jfp.ms/mayorsrace as the campaign progresses. 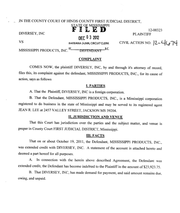 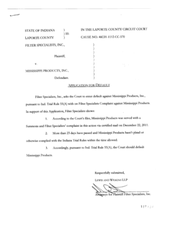 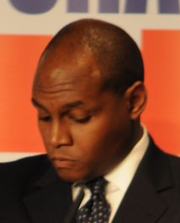 A fifth lawsuit has emerged against Mississippi Products Inc.

JACKSON — A mayoral candidate running for office on his business experience told the Jackson Free Press this morning that the distribution of documents—showing that his family company, Mississippi Products Inc., is currently facing multiple default judgments in at least two states for more than $100,000 owed to vendors—is an attempt to "impede our momentum."

"We have an ongoing contractual dispute," Jonathan Lee said in an interview this morning. "… There's little I can say." He attributed the judgments to a disagreement between Mississippi Products, vendors and a former customer.

The JFP received 11 pages of information Tuesday about the business dispute mailed in an envelope with no return address. Lee was already scheduled for an endorsement interview by the paper's editorial board this morning; the board presented him the documents for a response.

On March 14, 2013, Priester signed an "order allowing examination of judgment debtor Mississippi Products Inc." The judge granted Georgia Pacific lawyers permission to examine "all books, papers, documents and all other notes of any kind…" and ordered that a subpoena be issued and "served upon the above Judgment Debtor, Mississippi Products Inc., to be served on Jonathan Lee at 2457 Valley St." to appear on April 4, 2013, to be examined under oath.

At press time, the JFP is unclear whether Lee appeared in court on April 4.

The documents also contained a docket page from LaPorte (Ind.) Circuit Court showing that Filter Specialists Inc. filed a claim against Mississippi Products Inc. on Dec. 14, 2011, with a default judgment for $20,700 entered against the company on Jan. 17, 2012.

A default judgment typically means that one of the parties to a legal suit has not performed a court-ordered action, and the judge deems that the inaction prevents the issue from being resolved. Thus, the judge enters a default judgment settling the dispute on behalf the party that did comply with court requests.

Lee attributed the default judgments to the fact that his family business is a "middleman" between the vendors and a contractor that Mississippi Products Inc. supplies. The Lee business resells disposable products to medical, janitorial, administrative, industrial and filtration companies, and provides warehouse space, its website states. Lee said today that the company can get stuck with supplies that a customer won't pay for; he said vendors will not take products back because they want the money even if a product is priced too high in the first place.

When asked who is responsible for paying the company's vendors, he responded, "I have to pay the vendor," adding later, "We're in negotiation to handle this matter with all the vendors. … We don't think we're wrong." He would not, however, immediately provide the name of the company's attorney or provide more information confirming that negotiations are in process. He left the interview today saying he would consult the business' attorney for any additional statements.

Lee emphasized that the default judgments resulted from a typical "business dispute" and are all still "in negotiations."

"It's what happens in business. … I did not know in December 2011 that this was going to get to this point," he said today.

The candidate strongly emphasized that he was no longer president of the company when the judgments were rendered—saying that he stepped down from that position effective Dec. 31, 2011, and that current secretary of state documents would prove it.

The 2012 corporate annual report, dated Oct. 8, 2012, for Mississippi Products Inc., lists Jonathan J. Lee as president, Jean Lee (his mother) as vice president; and Kyna A. Lee as secretary—with his mother's name on the signature line, implying that she approved the report. The second page of the document does not list a name for president, only vice president Jean Lee and three incorporators as of October 2012. A year before, the report listed all those names plus Jonathan Lee as president.

Contrary to Lee's statement today that secretary of state documents would show that he resigned as president effective the end of 2011, the documents only indicate that Lee resigned as the company's "registered agent" on Dec. 21, 2011, a week after the Indiana company sued the company. A "registered agent" is not necessarily the same as a company executive; often the "agent" is the attorney or corporate officer who handles a company's corporate paperwork.

The secretary of state's website does not indicate any other possible change to Mississippi Products' corporate hierarchy or officer status until Oct. 25, 2012, when R. Jean Lee, (Ruby Jean Lee: Jonathan Lee's mother) filed to become the registered agent, nearly a year after her son removed his name as agent. It is written in by hand that her position is "president," even though the secretary of state's site still lists her as vice president. Lee said today that the company kept corporate minutes that show when he stepped down as president, but said he is not willing to show them to prove the date. He said he would not provide further details because the dispute is a private business matter.

Lee emphasized to the JFP editorial board that he has never been an owner of Mississippi Products Inc., and that he received a paycheck from it like anyone else would. He said he has not worked for the company since he resigned as president in late 2011 because "this is a full-time thing, running for mayor." He said he does check in on the business from time to time, though, and has "been aware" of this dispute, although not involved in it. He said his mother would not be willing to be interviewed about it.

When told that "default judgments" imply that the company has not been defending itself in court proceedings, Lee reiterated that the outcome was still in negotiation, adding that he is not aware of every detail that has transpired. "I am not intimately involved in that; I have not been there," he said.

The candidate said he had heard about the anonymous mailing before the meeting today, saying that other media and campaigns had received it as well this week. He came prepared with a statement, blaming it on political chicanery.

"With my campaign for mayor picking up a tremendous amount of steam and just two weeks left before the Democratic Primary, this is no doubt another attempt to impede our momentum," the statement said. "This is an ongoing business issue, not a personal one, and it is totally unrelated to my campaign for mayor."

When asked why he did not reveal the legal dispute with the business sooner, Lee said it is "not germane" to his campaign for mayor, also saying that he did not believe that a story about it is "fair." He also said that he did not alert donors and supporters about it in advance of the documents being distributed this week.

Candidate Lee, who was chosen as chairman of the Jackson Chamber of Commerce about a year after he moved into Jackson in 2008, has long touted his experience running Mississippi Products Inc. as a primary reason to elect him mayor of Jackson. On his campaign website, Lee said he took over the family business after his father, John Lee, died; he was 24 when he took the helm. "Jonathan not only became the head of his family—but also the head of his father’s business," his campaign site states.

"Remembering one of his father’s most important lessons, Jonathan built a highly qualified team of experts to help navigate through the transition. Today, the South Jackson business continues to grow—and remains committed to the area. Jonathan knows how to help Jackson businesses and communities grow."

Jonathan Lee returned a call the JFP left this afternoon about several follow-up questions. He did not directly answer the question of whether he appeared in court on April 4, 2013, in response to the subpoena, saying instead: "I have worked it. We are working on that. ... We are aware of that, and it's been handled." He then added as an afterthought: "I did not break the law and not appear. ... There's no warrant for my arrest."

When told that the JFP has not found secretary of state documents that indicate that he removed himself as president of Mississippi Products Inc. in late 2011, he said that he wasn't sure why it wasn't there and that he would have to look and see if he can find the document. But, he added, "at the end of the day, it's my family business, and I am aware. ... At this point, that is a moot issue," he said, referring to whether or not he was president of the company during 2012. "It's an ongoing legal issue."

Lee said that until about January 2012, he managed the company day-to-day and is still involved in a smaller role.

He still declined to name the attorney who he says has been helping Mississippi Products Inc. negotiate the legal dispute over the last year and a half. He said he talked to the attorney earlier today and they decided to let the JFP "roll with what you've got."

After the above story published earlier today, the JFP checked the cover interview that Jonathan Lee did with our paper last June, around the time he announced that he was running for mayor. In that interview, he said that he is a small business owner. This morning at the JFP, he contradicted the earlier interview, saying he has not been an owner of the company. He told the JFP last June:

I think it's fair to point out, too, that I'm not a corporate guy. I run a business on the corner of Valley (Street) and Raymond Road. I have employees that take the bus. We have known them and are intimately involved with them for many, many years. The perspective of being a small business owner, (and) a black business owner is a lot different from a corporate guy. I think that's one of the divisive tactics, the ugly things that happen during the election cycle to really take our eye off the ball.

The full complaints and attachments of Georgia Pacific, 3M and Pitt Plastics are now scanned and linked above to the left. One of the documents shows that Lee was served a subpeona at his home July 1, 2012, at 2 p.m.

Attorneys for the four companies that got judgments on Mississippi Products Inc. have not returned phone calls.