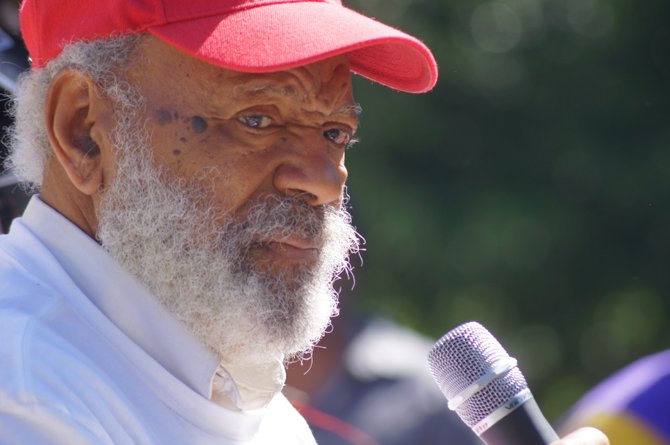 JACKSON, Miss. (AP) — Is the University of Mississippi putting a glossy sheen on its commemoration of 50 years of integration?

One expert says it is, and he contends that's not good for the university or the state.

Ole Miss history professor Charles Eagles says the university should reach beyond slogans and teach more about slavery, segregation and other difficult parts of the state's past. That way, he says, people could better understand why mob violence erupted when James Meredith finally gained court-ordered admission as the university's first black student on Oct. 1, 1962.

"Maybe we should use the 50th anniversary of this to learn the right lessons and to teach the right lessons, to educate people about the right lessons. I don't think we're doing that at the University of Mississippi, not doing as well as we could," Eagles said Wednesday during a speech at the Old Capitol Museum in Jackson.

Ole Miss has held a series of lectures, art exhibitions, concerts and other events during the past year to mark the anniversary of integration. U.S. Attorney General Eric Holder appears on the Oxford campus Thursday night to give a speech about civil rights.

Chancellor Dan Jones says on a university website that integration "positively changed the university, our state and our country."

"With his admission on Oct. 1, 1962, Meredith became one of the most heroic figures in the American Civil Rights Movement," Jones writes. "His persistence and ultimate success laid the foundation for thousands of African-American students who earned degrees from this university in the years that followed. On the anniversary of such an important event, it is important to focus on the many positive results of that day and renew our commitment to goals yet to be fully achieved."

The university's slogan for the commemoration is "50 Years of Integration: Opening the Closed Society." It borrows a phrase that Ole Miss history professor James Silver used in 1964 in his book, "Mississippi: The Closed Society," which sharply criticized the state's racial segregation. White backlash pushed Silver to leave the university and take a job at Notre Dame.

Eagles' 2009 book, "The Price of Defiance: James Meredith and the Integration of Ole Miss," gives a detailed look at Meredith's life and a history of Ole Miss and race. Eagles said he's puzzled by some of the posters at Ole Miss now with slogans like "50 Years of Knowledge," ''50 Years of Courage" and "50 Years of Integration." He said nobody could be against those, but the slogans don't teach anything.

"'50 years of integration.' Well that's all real good. We should be proud of that, I suppose," Eagles said. "But what about 100 years of segregation that preceded it?

"And the signs don't say, '50 years of forced integration.' It's, oh, '50 years of integration.' So I'm suggesting that before we get too excited and celebrate what's happened since 1962, we should be paying a little more attention to the causes. We should celebrate progress but also acknowledge error," he said. "If we're going to claim redemption, we should also admit sin."

The Rev. Duncan M. Gray Jr., who was bishop of the Episcopal Diocese of Mississippi from 1974 to 1993, was a minister at St. Peter's Episcopal Church in Oxford in 1962, and he was among the religious leaders who called for calm in the face of violence. Two people were killed and more than 200 injured. Gray, 86, said that in Mississippi and at Ole Miss now, he sees "all the difference in the world from what it was in 1962."

"I think we've still got a long way to go, but Lord knows we've come a long way, now," Gray said Thursday after listening to Eagles' speech. "I think what, if you say, 'What lessons did we learn?' We learned that something like the Citizens Council made such a big difference in those days because I think if you just left it to the people of Mississippi, they might not've liked it, but there wouldn't have been rioting and all that sort of thing."

The Citizens Councils were made up of prominent white people who controlled the state's political system in the early 1960s and used spying, economic pressure and other means to try to preserve segregation.

Nic Lott of Jackson, who was the first black student body president at Ole Miss in 2000-2001, said the university has changed significantly.

"I think we do recognize that we've come a long way and we continue to have some challenges, but I was disappointed that he kind of played down, minimized, progress that we've made," Lott said of Eagles. "I think part of the Meredith legacy is shining and highlighting that progress."

You're such an articulate spokesman, Darryl. Please continue to share your unique and insightful perspective on civil rights.

Yes, Darryl is a model for us all. So is his other brother Darryl.

The battle for equal education continues.

We were just one of the last states to join the end of segregation. It happened. The playing field is level if not tilted the other way in some regards. I agree with meredithetc in that the battle for equal education continues, but the opportunities for achievement of education is now equal.