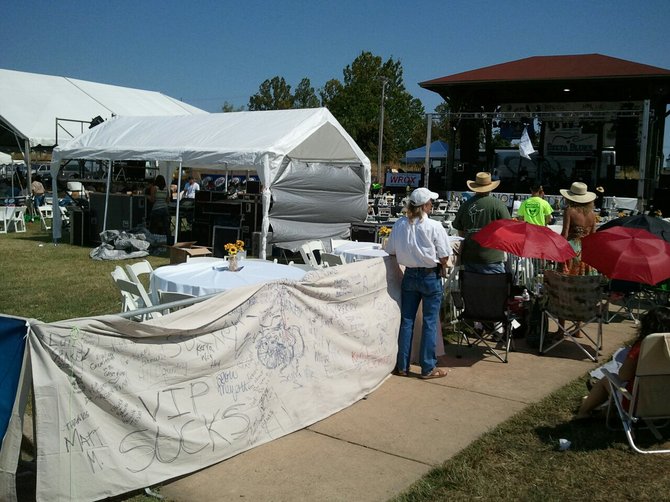 A VIP section that keeps the majority of the fans well at a distance makes for a dreadful concert experience. Photo by Natalie Long.

About three weeks ago, my friends Erica, Sam and Jonathan and I ventured up to Clarksdale to the Sunflower River Blues and Gospel Festival to see Robert Plant, the legendary frontman for rock royalty Led Zeppelin, and indie singer/songwriter siren Patty Griffin. Not only were we going to see this dynamic duo, but the concert was free. We couldn't turn down the chance to attend the festival, plus we were all excited because a few of us had never been to Clarksdale proper.

Our journey through the back roads of the Delta to Clarksdale was filled with jokes, comical sightings, laughter and great music spun by our chauffeur, Erica. As we approached Clarksdale and found a pretty easy parking space, all of us bolted out of the car to run to the main stage to get a good spot for Sir Robert, as well as blues great Super Chikan and Jimbo Mathus, both Mississippi music troubadours.

Imagine our shock and horror, then, as we entered the main gates to the festival and saw barricades and country-club white tents set up all within the entire width of the main stage. I approached a security officer and asked him what all of the tents were set up for, and he replied, "VIP only."

My crew and I found a spot, but it seemed like miles away from the stage. Bands had been playing all afternoon, so I expected the VIP section to be filled with music lovers with money to spare, the press or even the bands performing later. I was sadly mistaken. These VIP tents were set up, costing anywhere from $1,000 to $10,000, and they were all empty.

Bands who had been playing the festival for years played to no one. All the indentured servants like myself and countless others were forced to sit stage left or even further back. I was furious, and even more furious as we observed that the VIP section didn't start filling up until Super Chikan (who opened up for Plant and Griffin) took the stage.

Members of the press could not take any pictures until three songs in and had a special "zone" to stand in that was still several yards away from the main stage. Bands performing throughout the time we were there kept requesting the sound engineers adjust their settings, and even though we heard the bands' requests from miles away, somehow they fell deaf on the ears of the sound engineers. My blood (as well as my skin) began to boil.

While Erica and I took a break from the sun and ducked into Ground Zero Blues Club, I heard other festival patrons complaining about the same thing. Why on earth would you hold a free concert, then force music lovers from all over the state, country and world sit off to the side while the affluent get to see the headliners?

One of the guys I met was from England and had flown in for the show, and he was heartbroken that he was forced to sit off to the side to see his music hero. Hell, we all were. Of course I heard the sorry excuses: "Well, how can the festival promoters afford Robert Plant if we don't get VIP sponsorship?" "How else is Clarksdale going to make a profit from this festival?" It does not take a super genius to figure out that if you can't afford whomever the artist is, then don't make it a free concert.

I'm sick of attending music festivals, either locally or regionally, that these so-called VIP seating arrangements. Not everyone works for a law firm, hospital or a bank. Many of us that attend these festivals do so because of our love of music, because it's in our hearts, not in our wallets.

To the Sunflower River Blues and Gospel Festival promoters: I really hope to attend your event next year, because even though I was in a land far, far away, I enjoyed the music you brought to our state. I enjoyed the people I met, as well as the fun times I had with my friends. Please think about the debacle of this year's festival when planning for 2013.

The organizers already apologized onstage that weekend for the whole vip mess...I'm quite sure they realized that that was a mistake that they won't make in the future. Personally, I blame Mr. Plant...he's been stealing blues music for years (which I have no problem with); the very least he could've done to give back was to do a free (or significantly reduced cost) show at a Mississippi blues festival (that's been having free music for almost 25 years) so they wouldn't have had to do that vip mess in the first place in order to pay him.