Dozens of States Make it Hard to Get Abortions 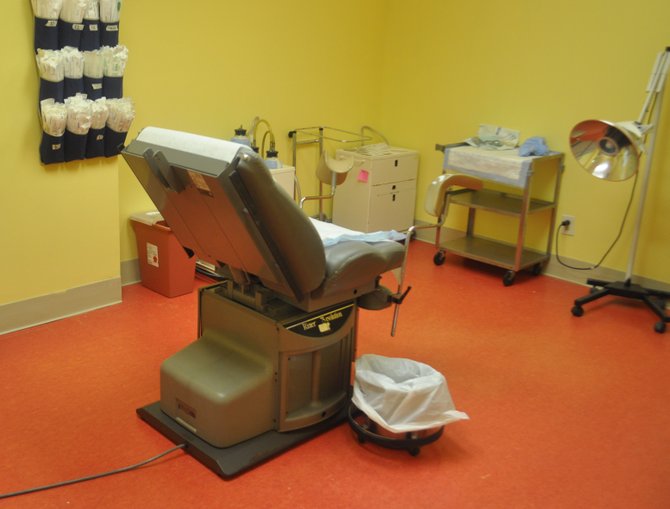 It's legal to get an abortion in America, but in many places it is hard and getting harder. Photo by Trip Burns.

CHICAGO (AP) — It's legal to get an abortion in America, but in many places it is hard and getting harder.

Just this year, 17 states set new limits on abortion; 24 did last year, according to the Guttmacher Institute, a pro-abortion rights nonprofit whose numbers are widely respected. In several states with the most restrictive laws, the number of abortions has fallen slightly, pleasing abortion opponents who say the laws are working.

Some of the states with the toughest laws are spread across a big middle swath of the country, stretching from Canada to the Gulf of Mexico.

In South Dakota, which has just one abortion clinic, lawmakers want to extend the required waiting period from two days to three for women seeking to end a pregnancy. Next door in North Dakota, there's only one clinic. The same is true in Mississippi, where a new law threatens that lone clinic's existence. In several states, doctors now must warn women about purported risks from abortion that most scientists reject.

There are hurdles even in states like Illinois, where abortion laws are more lenient and clinics relatively plentiful.

Patients arriving for abortions at a Granite City, Ill., clinic can expect to find their photographs on an anti-abortion activist's website. And before her abortion in June, a Chicago woman says her own gynecologist refused to offer any advice, fearing that just mentioning abortion could endanger her job at a Catholic hospital.

"The level and scope of activity on abortion and family planning is completely unparalleled to anything we have seen before," said Elizabeth Nash, Guttmacher's states issues manager.

"The way people are attacking abortion is distressing because they are getting much more creative the way they're chipping away" at it, said Dr. Renee Mestad, an OB-GYN who provides abortions in upstate New York. Access to abortion isn't much of a problem there. But it was where she used to work in Missouri.

"The ideal thing would be that no one gets pregnant unless they're ready — that all pregnancies are desired pregnancies, but that's not what happens," Mestad said.

While surveys have consistently shown most Americans support keeping abortion legal in certain circumstances, many people's views are nuanced. A Gallup poll last month found nearly as many voters consider themselves "pro-life" as those who say they are "pro-choice."

Anti-abortion attorney Teresa Collett, a law professor at the University of St. Thomas in Minneapolis, says her ideal would be "to live in a country where abortion is not even really thinkable." She'd like to see Roe vs. Wade overturned, but even if it is, she said, the debate won't end because it would be up to states to ban abortion.

Some seem to be moving in that direction.

—More than 30 new abortion laws have been enacted this year, a record topped only by the unprecedented 92 laws last year.

—Most states — 41 — ban abortion after a certain stage of pregnancy, generally around 20 weeks, unless the mother's life or health is in danger. In many of those states, the bans are based on a challenged premise that fetuses that early can feel pain.

—Pre-abortion counseling is required in 35 states; 26 require waiting periods after counseling, and in 13 states, the counseling must warn women about alleged risks from abortion.

States within the nation's most restrictive region, the midsection, include North and South Dakota, which each have only one abortion clinic and have seen the number of abortions drop slightly since 2008.

And they include Texas, which has the most prescriptive counseling laws — requiring, among other things, that doctors tell women abortion is linked with breast cancer. A group of scientists convened by the National Cancer Institute in 2003 concluded abortion did not raise the risk of breast cancer.

A Texas law passed last year requires women to get an ultrasound and their doctors to describe the fetus. Texas abortions also have dropped every year since 2008.

Next door, in Oklahoma, state authorities are fighting court action blocking a law with similar requirements. Collett, the anti-abortion attorney, has helped Oklahoma defend the 2010 law. She says it might lead some women to change their minds.

While records from several states with restrictive laws show fewer abortions in recent years, whether there has been a true decline is uncertain. Not all states track the rate — the number of abortions per 1,000 women of reproductive age. Pregnancies are down, too, in many states, a development some experts link to a weak economy. The most recent national abortion statistics are from 2008. The trend shows the number and rate of abortions have generally leveled off after a long period of decline.

In South Dakota, a new law facing a legal challenge would impose a three-day waiting period. During that time, a woman would have to visit a crisis pregnancy center discouraging abortion. Utah is the only other state with a waiting period that long, but it doesn't require such specific counseling.

In July, a federal appeals court in South Dakota upheld a 2005 law requiring doctors to warn that abortions increase risks for suicide. Scientific research disputes this.

Dr. Carol Ball, at the state's lone abortion clinic, in Sioux Falls, says information she's required to tell patients is "of questionable validity" and designed to make them feel shame and guilt.

"They're throwing hurdles in front of us to see when we stop jumping in front of them. If I stop, it means they win and women of South Dakota lose, and I'm not willing to let that happen," Ball said.

Across the state to the west in Rapid City, Dr. Marvin Buehner cares for women with high-risk pregnancies and does a few abortions each year when pregnancy endangers the patient's life.

He's required to describe each fetal stage and explain that abortion ends the life of a separate human being — even to women whose fetuses have deadly abnormalities and won't survive.

One of his patients is a 31-year-old woman who gave birth Oct. 14 to a stillborn baby with a rare, inherited and ultimately fatal condition called achondrogenesis, which causes severe deformities. She had two previous babies with the same condition. One was also stillborn, the other died an hour after birth.

She had considered abortion when tests showed this baby, too, was doomed, but couldn't afford the cost. It would have involved traveling nearly six hours to the Sioux Falls clinic. And because her life wasn't at risk, Medicaid in her state wouldn't pay for it, even though it was clear her baby would be born dead or die shortly after birth.

In Illinois, laws are relatively lenient. The Hope Clinic in Granite City in Southern Illinois caters to women from neighboring states like Missouri and Kentucky where it's harder to get an abortion.

Though you'd expect to see that trend, "they're able to find us" early on, she said.

Most abortions occur in the first 12 weeks when the embryo is about the size of a lima bean. Major organs have begun developing, but the embryo at this stage looks nothing like the photographs of mangled fetuses that abortion foes promote. Those pictures generally represent late-term abortions, those after five months, which account for less than 2 percent of abortions.

Michael is a retired obstetrics nurse who has run TV commercials showing graphic images of dismembered fetuses. She regularly pickets outside the clinic, encouraging patients to change their minds. She also photographs them and posts their pictures on her website.

She said she has compassion for these women, but considers abortion murder.

The photographs she promotes may not depict typical abortions, but Michael says they sometimes work to persuade women to continue their pregnancies.

"I really didn't go into this race with the hopes of winning. My point was to be the messenger" against abortion, she said.

Some Hope Clinic patients come from Kentucky, where the number of abortions has steadily dropped from almost 4,400 in 2007 to roughly 3,900 in 2010.

Kentucky's only two abortion clinics are in Louisville and Lexington, an hour apart and several hours from some of the state's most impoverished counties. Kentucky requires a 24-hour waiting period, and five of the seven surrounding states also have waiting periods. Public funding of abortions in Kentucky is limited to cases of rape, incest or when pregnancy endangers a woman's life.

Mississippi has similar restrictions and only one abortion clinic, in Jackson, threatened with closure because of a new law requiring providers to have local hospital admitting privileges. State Health Department data show Mississippi abortions have steadily dropped, from nearly 3,000 in 2007 to about 2,200 in 2011. Meanwhile, the number of Mississippi residents seeking abortions out of state grew from fewer than 2,000 a decade ago to at least 3,000 in more recent years, according to data from the state Department of Health.

"Never have times been this restrictive," said Dr. Willie Parker, a Washington, D.C.-based physician who since June has traveled periodically to Mississippi to provide abortions.

Parker said he's often struck by the hardship many women face, and told of a 33-year-old mother of four who lost a child to cancer two years ago. She was unemployed and still grieving when she learned she was pregnant again. The woman traveled three hours to the Jackson clinic to get required counseling in June. Then she had to return the next week for the abortion.

"She told me she couldn't afford to have another child financially or emotionally," Parker said.

He said he doesn't know whether she was using birth control; he doesn't usually ask.

"All I need is to make sure that they're certain" about abortion. Most "have already been thinking about this decision for weeks on end," he said.