Who Stole Our Potholes? 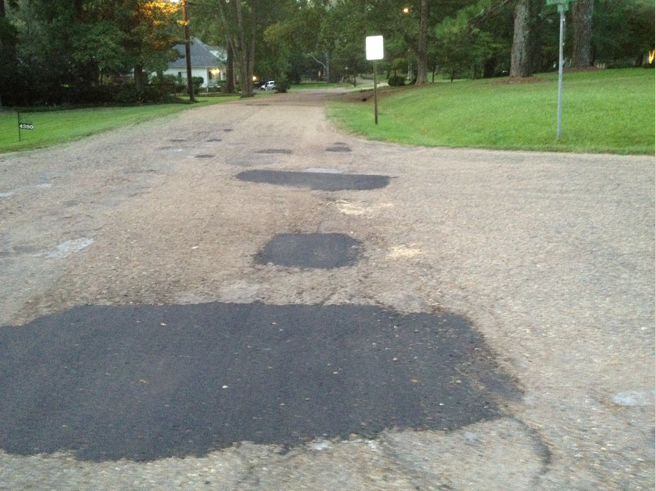 Scene of the crime: Note the patched areas where the potholes once stood. Photo by Courtesy Marc Leffler

You might not think they would be missed, these much-maligned cavities of asphalt. In fact, potholes are often seen as a true public nuisance, destructive and distracting to vehicle drivers and pedestrians alike.

But there is one Jackson neighborhood—Broadmeadow in north Fondren—where you'll find a few people who are positive about their potholes. And now, those potholes have mysteriously gone missing.

When the potholes were still there a few short weeks ago, life on the street was much better. That's according to neighborhood resident Beth Autrey, whose home on Brook Drive sits less than a block from where the theft occurred Tuesday, Sept. 4.

"The two things that I really appreciated: the potholes slowed down the traffic. Also, because of how many potholes were on our street, people would choose a different route to avoid them," Autrey said. Like many in the area, Autrey views fewer cars coming down the street as a good thing.

As president of Broadmeadow Neighborhood Association, Autrey even recalls an example of particular pothole pride: "On our neighborhood website, there's actually a picture of children at a festival playing in the potholes."

Autrey noted that she did not see who perpetrated the pothole robbery, since she wasn't home at the time. "But I did notice right away that they were gone," she said. Her husband, Dan Autrey, was home on that day, however, and witnessed some rather suspicious activity involving men with shovels and asphalt. He wasn't too worried though, since, in his words, it was "just a guy working, and two guys watching him. It looked like they were digging out deeper potholes."

Ask fellow Brook Drive resident Deirdre Danahar to relate pothole benefits, and she tells a similar story. Every pothole works to "slow down drivers that otherwise might speed on the street," Danahar said. "In the past I have seen drivers well exceed the speed limit."

And yet, Danahar's view does differ somewhat from that of the Autrey's. What would she say to those responsible for this crime?

The City of Jackson's street maintenance division was not reached for comment in regard to this story.