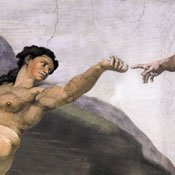 How do ideas affect our actions when it comes to wanting to change something in society? In this case, what kinds of ideas can make us want to take action to improve quality of life for everyone?

Writing out of my own Christian tradition, I begin with the historical dominance of Christian belief in a patriarchal God. This history is easily illustrated. I personally believe that the notion of a male God is the primary source of worldwide brutality and human injustice for at least the last 6,000 years.

"So God created humankind in God's image, in the image of God they were created; male and female God created them." (Genesis 1:27)

Imagine how different the world would be if religion had honored the creation of male and female equally as images of God. Imagine a world in which you can actively participate in balancing the scales of social injustices worldwide. Imagine little girls and boys all over the world who would not go hungry; who would not experience sexual assault or experience genital mutilation simply because "their" God is a dominating presence of patriarchal power.

Many programs and activities are available to help balance these injustices brought on by religious insistence of a male God that keeps patriarchy in place and breeds oppression for the powerless. Books, online study groups, progressive educational curriculums, children's books, and national and international organizations are available for individuals to grow beyond this traditional theology that portrays God as a dominating male deity.

For example, Sister Joan Chittister has written many books that model Jesus of Nazareth as one who threatened the male-dominated system of Rome for the powerless by curing on the Sabbath, consorting with women and questioning authority. I especially recommend her 1998 book, "Heart of Flesh: Feminist Spirituality for Women and Men" (Wm. B. Eerdmans Publishing Co., $20). Miriam Therese Winter offers a remarkable series of books recognizing women of scriptural heritage. For liturgical Christians, I strongly recommend "She Who Prays: A Woman's Interfaith Prayer Book" (Morehouse Publishing, 2005, $22) by Jane Richardson Jensen and Patricia Harris-Watkins.

The company I work for, The D.L. Dykes Jr. Foundation, has produced a broadcast quality 16-session DVD progressive educational series, each session 15 to 18 minutes in length, titled "The Challenge of Jesus," (available at http://www.faithandreason.org, $295) featuring John Dominic Crossan, in which Dr. Crossan lays out the Jesus story in four "lecture-documentary" themes: The World of Jesus, The Life of Jesus, The Death of Jesus and The Resurrection of Jesus. Understanding the Roman world, in which male domination fostered a world of violence through religion, war, victory and peace, is essential in understanding our world today. It's also essential if we want to know anything about the Jesus of history.

The truth is that this work needs to be addressed early on during the impressionable years of young children. Once, not many years ago, while visiting my 3-year-old granddaughter, she asked if we could read the "special books" that mama had told her she was forbidden to read because of their age and delicacy. Being a grandmother, I thought, "What could it hurt, as long as I taught my granddaughter to be very careful with the delicate books?"

Because my granddaughter knew the books were very special, she began to "read" from the book a type of story she knew to be mysterious and special. She began to "read" about God. Of course, she could not read, so she made up stories in which she repeatedly referred to God as "He." When it was my turn to "read," I too read about God. Only, from "my special book," I "read" stories in which I referred to God as "She."

Suddenly, my granddaughter stopped me and said: "Yaya! God is a boy! You keep calling God a girl!" I said to my granddaughter how interesting it was that my "special book" referred to God as "She." Although my granddaughter insisted God was a boy, I had the rare moment to introduce into her thoughts that she too was created in the image of God and God could be and was "She" as well as "He."

Since, that time, I have written three books that simply "drop in and walk away" the idea that God is not male. God is present in both male and female, and we are all created in the image of God. For young children, I have written a coloring book, "God Really Did It" (yet to be published) that invites children to see themselves as images of God, whether little girls or little boys.

If we want the world to be different, we must recognize that religious belief packed with male-dominate imagery keeps us from experiencing a world in which male and female work together creating a just world where all God's children are dealt with equally.