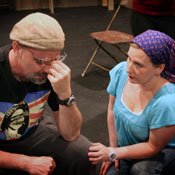 Left to right: Richard Lawrence as James and Stacey Overstreet as Marty in "Circle Mirror Transformation."

"Circle Mirror Transformation," written by Annie Baker and directed by Kerri Courtney Sanders, opens Thursday as a part of New Stage Theatre's "Unframed" series of plays. This series is separate from its regular season and presents more modern, edgy plays.

"The goal of the series is to attract theater audiences that are interested in contemporary theatre," said New Stage Artistic Director Francine Thomas Reynolds in a release.

"Circle Mirror Transformation" definitely fits this category. It is both fresh and award winning. The play premiered off-Broadway in 2009, winning the Obie Award for best new American play, performance and ensemble.

The play's director is also fresh and contemporary. Sanders, 24, graduated from Belhaven University in 2010 with a bachelor's degree in theater, and she is an acting and directing intern at New Stage. A contemporary director combined with a modern, award-winning play should have great results.

This play is about five different people who are brought together by an acting class at a community theater. "'Circle Mirror Transformation' hits home for the theater community," Sanders says.

The show's small cast features Stacey Overstreet, Richard Lawrence, Brent Hearn, Marie Warner and Tessa Eltzroth. Throughout the play, the characters participate in many of the acting games that all thespians have experienced in acting classes. Sanders used these games during rehearsals as team-building exercises. She found it helpful because the actors created "natural reactions" that help them to react realistically during a performance.

The play is named after a theater game where one person makes a motion and the others copy it, then the next person starts the motion. To understand how the game influences the production, go see the show. Performances begin Thursday, March 22, and continue through Saturday, March 24, at 7:30 p.m. at New Stage's Warehouse Theatre (1000 Monroe St., 601-948-3533, ext. 224). Tickets are $7, a fair price to see an Obie award-winning show.