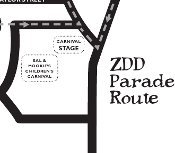 Comcast Come-On-In Party: Noon 'til Cain't Do It No Mo' at Fitzgerald's at The Jackson Hilton (1001 E. County Line Road, 601-957-2800). The Queens' very favorite "Missicians" (singer/songwriters from all over the state) rock from the get-go! Free and open to all.
5-9 p.m. Arts, Eats and Beats: It's Fondren's giant annual street party to welcome spring to Jackson. Enjoy live music, street vendors, food and great company. Free.
6:30-7:30 p.m. See the Budweiser Clydesdales up close and personal on Duling Avenue in Fondren. The raffle drawing will be held for the winner to ride the Bud rig during the Zippity Doo Dah Parade Saturday.

Friday, March 23
11 a.m. — The Big Hat Luncheon is at Sal & Mookie's; $21 in advance; $26 at the door (not included in the Weekend Pass*. Call 601-368-1919 to make your reservation.)
12:45 p.m. — Big Hats on Parade—(informal sashay from Sal & Mookie's into the center of Fondren).
2-5 p.m.—The Everyday Gourmet's Annual Wannabe Welcome Party. (Included in Weekend Pass*.)
3-7 p.m.—Chillin', Gossipin', Tellin' Lies—in Fitzgerald's at the Jackson Hilton—snacks and music provided by the Hilton (included in Weekend Pass*)
6-9 p.m. — Dance Concert on Duling Avenue featuring Memphis dance band The Bouffants; free.
8 p.m. — The first-ever Pepsi Big Hair Ball with music from the Mississippi Blues All-Stars, benefiting Animal Rescue Fund of Mississippi is at the Jackson Hilton. Prizes for biggest hair, weirdest hair and funniest hair (included in Weekend Pass* or $10 at the door).