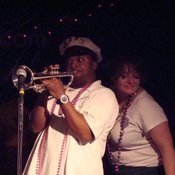 Fondren Express Trolly and Midtown Partners will provide transportation to CS's from Hal and Mal's starting at 4:30 p.m.

What is a second line, some Mississippians may wonder. In New Orleans, when parade watchers start to follow the band to enjoy the music, it is referred to as the "second line" of the parade. The first line is the official parade. People also have second lines sometimes just to celebrate. It isn't uncommon to see them held with marriages, funerals or even family reunions.

Capital City Beverages will sell Yazoo Brew and Lazy Magnolia specialty beers. The proceeds go to buying toys for the Blair E. Batson Children's Hospital. Each stop during the second line also has bins for participants to drop off toys.

Mark Roemer will play at CS's. After the second line, enjoy live music in the Hal & Mal's restaurant from The Lucky Hand Blues Band and The Rumprollers for free. WOOD plays in the Red Room ($5).

All members of the public are encouraged to dance, march, jog or even ride their bikes during this free event. The route of this second line celebrates and commemorates the original St. Paddy's Parade route 30 years ago. March with Southern Komfort Brass Band, and enjoy traditional brass band music during the second line. Don't forget your umbrella!