No Cons in Cans 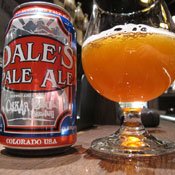 When Krueger Brewing Company released its cream ale in a can in Richmond, Va., on Jan. 24, 1935, its sales soared by 550 percent. That same year, 37 breweries followed suit. Beer became easier to transport, took up less space and got cold more quickly. It just made sense for breweries to put their beer in a can.

In Longmont, Colo., in 2002, Oskar Blues Brewery canned its flagship beer, Dale's Pale Ale, making it the first canned craft beer. Craft beer is a beer brewed by a company that annually produces six million barrels of beer or less. Still, canned craft beer didn't catch on until the past couple years. It is easier for small start-ups to bottle beer than to invest in canning equipment, and it took a while for craft beer lovers to consider enjoying their brew of choice in the same way that commodity beer lovers enjoy theirs.

Now, though, 186 craft breweries worldwide have canned 561 beers. It's a trend that has spread like malted wildfire.

Drinker Friendly
Americans everywhere have fallen for canned craft beer. Whether it's a fad or a long-term trend is yet to be determined. But it is popular—with more than 70 styles available in a can, there's something for everyone to enjoy. But what about canned beer is so special? The fact that it's cheaper for breweries to can beer rather than bottle it translates to savings for the consumer. Personally, I would rather spend fewer bucks for a can than for a bottle.

I love the idea of beer in a can whether it's craft or otherwise. You can take it almost anywhere. Most alcohol-permissible beaches have a strict no-glass policy.

If you go on a hike or play disc golf, your beer is safer because cans won't shatter in your backpack.

Beer Friendly
I could give an entire science lesson on how a beer becomes "skunked." But, in essence, when a beer has been exposed to prolonged light, it acquires a skunky—that's to say smelly—profile. Obviously, if you drink a beer quickly enough, you have nothing to worry about. But do we really know how long a bottle of beer has been sitting on the average gas-station shelf? In a can, this isn't an issue because light can't penetrate aluminum.

When oxygen interacts with beer for long periods, it can provide a safe haven for bacteria. Oxygen can't enter a can, but it can slip under the cap of a bottle. This interaction can also change the flavor of the beer by making it go flat.

EnvironmentallyFriendly
Let's not forget the environmental benefits of canned beer. Cans weigh less than glass bottles, so a lower transporting weight means fewer fossil fuels consumed. Who can argue with decreasing greenhouse gases? Aluminum cans are the most recycled packaging in the world.

According to kegworks.com, the average aluminum can is made from 44 percent recycled aluminum. Cans use a fraction of energy used to produce, ship and recycle, compared to the resources glass sucks up.

Ready to switch to cans? To me, it's obvious: Craft brewery Oskar Blues and the 185 other pro-can craft breweries score a perfect three for three, a fact most enjoyed with a cold, canned craft beer.