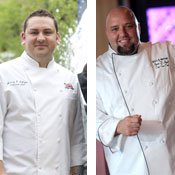 Let the battle begin! After just one hour, a winner will emerge and be crowned Iron Chef when the Ferguson Kitchen brings the Iron Chef battle to Jackson. Two local chefs, Steven D'Angelo of Nick's Restaurant and Jeremy Enfinger of Ruth's Chris Steak House, will fight in a head-to-head culinary battle to win the coveted title of Iron Chef Ferguson. They will each have one hour to cook a gourmet meal using a secret ingredient revealed during the competition. We asked them to go head-to-head in the JFP first.

Where were you born?
SD: New Orleans, La.

How long have you been cooking?
SD: Since I was a little boy. My first job was in a restaurant. I always I loved food ... My mama used to cook, she would put the food on the table and the whole place would get quiet and I (thought), "that is pretty powerful."

What made you want to become a chef?
SD: Being around food and then the ability to connect with people through food. I think that was number one.

JE: My grandfather was a produce vendor. He would sell vegetables and fruits off of his truck. As a family, we were always fishing or sitting on the porch making ice cream. So food has always been a part of my memories and family.

Honestly, though, I started cooking by chasing a girl. I liked this girl that worked for a caterer, and I got a job there to be close to her.

How did you prepare for the Iron Chef competition?
SD: The idea is that you can control chaos as a chef, cause that's what it is when you have 200 people coming in ordering 200 different things. You don't know what's going to happen in the next few seconds. To control chaos is one of the badges of honor that chefs are supposed to wear.

Going to the Iron Chef, I think, is such an exciting thing because you are presented with this chaos. You don't know what you're about to cook, but you have an hour to do it. The idea is, "OK, let's see what we can make up." So for me, what we are going to do is have fun, create something exciting, be clever about it and make everything from scratch. That's what I love about cooking: making things. So if we are going to use butter, we are going to make the butter we'll use.

JE: I've been going to the gym every morning. No, I'm just kidding. My sous chef and I have come up with different scenarios for a secret ingredient. That way, we know exactly what we're going to do if it is that ingredient, and we'll be prepared.

What do you hope to gain from doing the competition?
SD: Hopefully, some friends, fans, good experience and obviously some exposure for the restaurants here, because we're so proud of what's going on at Nick's right now with the food, what's going on at the Mermaid Café, and Kalamata Catering, which is our catering branch.

JE: As a corporate restaurant, it's difficult to gain local recognition. We are not a box with a name on it. Even though we are branded, we are here for our local community. Plus, we can show there is more to us besides cooking steaks.

Have you ever done anything like this before?
SD: Yeah, we've done a few. Every one's different. There have been larger ones with a formal setting; I think these are more for fun and entertainment. They're lots of fun.

JE: I've done competitions before but not locally. Locally, I've been involved in a lot of specialty events where I bring various samples.

Do you have any skills or past experiences, in or out of the kitchen, that will give you an edge here?
SD: There's no doubt that there's this fire to want to win ... But there is also the reality of community and of the artist; I think chefs are artists in their own way. I think (my) advantage is, hopefully, a touch of humility and a touch of arrogance mixed together, and then the years of temperament. I think those things lead to success.

JE: I did a lot of culinary competitions in culinary school. I was the captain of our team. We did competitions all the time, so that's an edge.

JE: Something with pork, like pork belly, because (it) is really versatile and easy to blend with other ingredients.

Which Food Network Iron Chef would you most like to face in the real Kitchen Stadium?
SD: That's a tough one, I love Morimoto; he's a cool dude. ... Living in Jackson there no reason I wouldn't want to have Cat Cora––you know, I think that would probably be the battle I should do.

JE: I would have to say Bobby Flay. He's a good guy and all. I just think he's stuck in the southwestern thing, so I think I could outdo him.