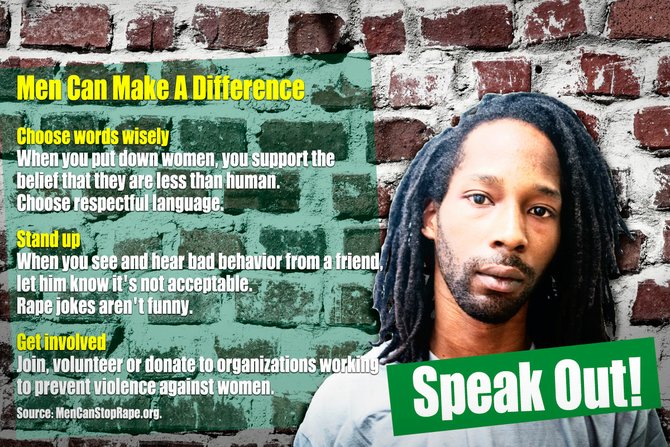 Toward the end of her freshman year at the University of Wisconsin in 2004, Laura Dunn attended a frat party where she drank way too many raspberry vodkas. Two guys she previously knew and trusted took her to another house. They were just making a stop before going to another party, Dunn thought.

The men had other things in mind, she told NPR News in 2010. They raped her as she drifted in and out of consciousness.

Dunn kept the incident to herself for 15 months, until a professor told Dunn's class that rape victims could report their cases to the dean of students. Dunn reported the incident that same day.

When you hear "sexual assault" and "rape," you might picture dark alleys in a big city instead of a college campus. In reality, students on campuses are vulnerable; rape and sexual violence are huge campus problems across the nation. It can happen to anyone, although girls aged 16 to 19 are four times more likely to be targets of sexual assault than any one else, the Rape, Abuse and Incest National Network states. Many of those targets are college students: One in five college women will become victims of rape during college, the majority in their first year, a New York University study found, and 80 percent to 90 percent of victims will know their attacker.

Like their victims, sexual predators could be people you know. In the NYU study, 35 percent of men reported that they might rape someone if they thought they wouldn't be caught or punished.

Alcohol is a big factor in rape. About three-quarters of reported sexual assaults and rape are alcohol-related. Consumption of alcohol or other drugs is not an excuse for rape; it does not matter if you drank or used drugs or if your attacker did. Under the law, being drunk or drugged makes a person incapable of giving consent, and without consent, sex becomes rape.

"Just being a woman on a campus makes you vulnerable, but drinking to excess at parties or in the clubs puts young women at a higher risk of being sexually assaulted," said Dr. Safiya Omari, director of the Southern Institute for Mental Health Advocacy, Research and Training at Jackson State University via email.

In the aftermath of sexual assault, one of the most important things you can do is to reach out for help. Most colleges offer support to students who have been sexually violated, such as counseling or guidance in reporting. John Conway, director of campus life at Millsaps College, said that victims are "always encouraged to report their case."

While universities may report a low occurrence of sexual assault cases, that does not mean they are not happening at the nationally estimated rates. "I think it means that women aren't reporting (sexual assault and rape) for various reasons," Omari said. "We get anecdotal reports at just about every education and/or outreach forum from students whose 'friend' was a victim and didn't report because they were ashamed, afraid, didn't know it was rape, didn't want to get anybody in trouble or any combination of those reasons."

As a victim, schools encourage victims to report sexual violence just as Laura Dunn did at the in 2004. You may not be fond of the idea, but it can often lead to closure. Try not to be afraid of informing law enforcement about what happened.

To avoid sexual assault from occurring, many schools start by educating students. Jackson State University has offered "Not on Our Campus," a program funded by the federal Office on Violence against Women, for three years. The program educates students about violence against women. And the campus chapter of the National Organization of Women at Millsaps College had a good turn out at a women's empowerment event, Conway said. Such programs are a beneficial and healthy way to spread awareness and gain knowledge. Being able to identify sexual assault is a key to protecting yourself and your friends.

Omari offered this advice to college women: "Being safe is important, although we must be careful not to blame the victim. Women should have the right to go wherever they want to go, dress anyway they want to dress and stay out as late as they want to without having to fear being sexually assaulted.

"That being said, however, I would say to women who are out drinking to always watch their drink and to use a buddy system, where they look out for each other when they're out partying. Know what you want out of any sexual encounter, and if you are uncomfortable and/or fearful about where a date is going, speak up! Trust your instincts: This is not the time to be polite or passive. And remember, rape of any kind is never the victim's fault. It is a crime motivated by the perpetrator's need to control, humiliate and harm."