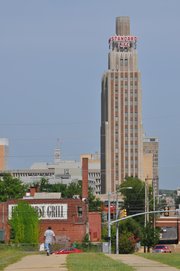 JRA approved an agreement June 27 with the city to help fund the Iron Horse Grill, which closed in 1999 after burning twice.

If the Jackson City Council approves the agreement, it will put JRA and the city at the end of a list of loan guarantors on the project. That means that if the owners of the Iron Horse Grill, along with seven individual backers of the project, cannot pay the loans on the project, the city will get the burden of repayment.

Jason Brookins, JRA's executive director, said the board reviewed the income-tax returns of all seven guarantors for the past three years. JRA was pleased with the financial stability of the project, he said, and was ready to move forward.

The city council will have to approve the agreement for the city to back the project.

Plans for the project include rebuilding the former Iron Horse Grill, which closed in 1999 after two fires left the building in ruins. Along with the restaurant and a live music venue, lead developer Joseph Simpson plans for the building to house a museum dedicated to Mississippi music legends, as well as the headquarters of the Mississippi Blues Trail.

JRA will loan Capital Hotel Associates the largest bulk of the funding for the $5.96 million, 15,000-square-foot project. They agreed to loan the developers $2.5 million, on the basis that they have enough cash-in-hand from other sources to complete the project at the time the parties close on the loan.

The developers will provide about $1.4 million for the project. The remaining $2 million will come from new market and historic tax credits. JRA attorney Zach Taylor said CHA is likely to sell the tax credits, a common practice among developers and banks, to fund to the project. A funding flow chart, created by CHA, shows Trustmark Bank as the project's tax credit investor.

"This is one of the better presentations I've seen in a long time," Tillman said. "I like what I see."

Board member Gregory Green said the board's finance committee approved the contribution agreement with the city before bringing it before the full board.

JRA board unanimously approved the agreement. Brian Fenelon, Ward 7 JRA representative, abstained from the vote because he works with one of the parties involved in the project, he said.

Developer David Watkins told the JRA June 27 that his company is prepared to finish construction on four structures planned for the first block of the Farish Street entertainment district.

Watkins told the JRA that a deal with the National Trust for Historic Preservation for $5 million in historic-district tax credits would provide the needed collateral for the funding to finish construction on four of the 13 buildings to be completed on Farish Street between Amite and Grant streets. Watkins said he hopes to close on the tax credits by the end of August.

The tax credits will act as collateral on a $10.2 million bond issue to the Farish Street Group that the city and JRA agreed to in March.

The end-of-August projection for closing on the tax credits is a slight delay from the mid-July date that Jason Goree, vice president of Watkins Development, provided to the JFP in early in May.

Goree also told the JFP in May that the Farish Street Group expected to open four clubs on the street by the end of the year.

When Watkins talked to the JRA June 27, that number was down to one. Watkins said he expects the development's premier venue, B.B. King's Blues Club, to be open by the end of December.

The historic tax credits, unlike new-market tax credits, take effect as soon as the buildings receive a certificate of substantial completion. Watkins said that makes the deal less of a risk to the JRA and the city, because the credits are in no way based on the performance of the businesses once they open.

The developers expect to have at least three other music venues or restaurants open on the street within a couple months of B.B. King's opening. Named for and owned in part by the Mississippi-born blues legend, B.B. King's currently has locations in Orlando, Fla., Memphis, Tenn., Nashville, Tenn., Las Vegas, Nev., and West Palm Beach, Fla.

Plans for the B.B. King's Blues Club on Farish Street include a two-story bar and grill, complete with a stage for live music performances. The third floor of the building will house Itta Bena, a fine-dining restaurant named for the Mississippi Delta town where B.B. King was born.

Farish Street was once the epicenter of African American culture and entertainment in Jackson, but has largely fallen into ruin over the past several decades.

Developers and city officials have discussed revitalizing the street since the early 1980s, but little progress was made before Watkins Development purchased the project in 2008 from Performa Entertainment, the former developer of Beale Street in Memphis.

Dixie G. Smith sounds fishy to me. 3 hours ago

Al Underwood Hal and Mal's would be the place for such an office, without risk to the taxpayers! 3 hours ago · 1 Lil McKinnon-Hicks

Hmmm, someone's claiming you'll have 2,000 sq ft of office space there ... be interesting when you show up to claim it. 3 hours ago Tom Dupree This is how the blues got started! 3 hours ago · 3

Melanie Mitchell Tucker Anything involving a headquarters for the Mississippi Blues Trail belongs in the Delta, not downtown Jackson. A no-brainer. Sounds like some investors just want to cash in on a theme and make some money. 3 hours ago · 3

Juke Joint
it is sad that the capitol of the blues has no Real Blues.

Clarxample ksdale being as poor as it is has twice as much as Jackson Ms going on ,Example Blues Marathon all them great and legend acts didnt even have a nite time gig at any Jackson club (Terry hamonica Bean ,Jimmy Duck Holmes ,Caddilac John,Bill Abe 2 hours ago

Charlie M Gillespie The Delta isn't the only place where the blues came from. Delta Blues is just one a many genres of Blues music. We have Hill Country Blues from around Holly Springs & Black Prairie Blues in the West Point area. Blues heritage is all over Mississippi and no one epicenter for it. It's certainly not for me to decide to put anything here or there I just keep hearing Crawford's own Big Joe Williams singing Throw Your Boogie Woogie in my ears ... about an hour ago via mobile

Ezra Wall Seems like the developer is throwing the Blues Trail name around to make his project look legit. about an hour ago via mobile · 1

Daryl Dunn Man, I bartended @ The Iron Horse Grill when it opened! So.....what 'xactly r they intending to do there?.... 6 minutes ago

All intriguing. I'll have Jacob check out the Blues Trail angle tomorrow and report back to y'all.

"Anything involving a headquarters for the Mississippi Blues Trail belongs in the Delta, not downtown Jackson." Thanks, Melanie - and keep spreading the word! Love, Memphis Tourism