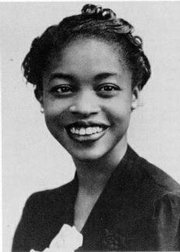 Courtesy the University of Illinois at Urbana-Champaign

On what would be her 97th birthday, JSU celebrates the life and voice of Margaret Walker Alexander.

JACKSON — The universality of Margaret Walker Alexander's words and her literary voice echoes today in the studies of English majors, African American studies majors and anyone who reads creative writing and social commentary around the world. Walker wrote not exclusively for the black cause, but inclusively, commenting on the purpose of man and the human condition as a whole.

The African American poet and author of the critically acclaimed book "Jubilee" (1966) was born Margaret Abigail Walker July 7, 1915, in Birmingham, Ala. She lived in Jackson from 1943 until her death in 1998.

The impact of Walker's life works and achievements continues today as a monument to the African American experience of the Great Depression.

On Walker's birthday this year, Jackson State University's Margaret Walker Center will host the benefit concert, "For My People: The Margaret Walker Song Cycle." Walker would have been 97 years old.

The multi-media "For My People" concert combines Walker's poetry with composer and pianist Randy Klein's music. Klein gained the musical rights to Walker's poems and will direct the concert with special help from vocalist Aurelia Williams and members of the renowned JSU Chorale. The performance combines a musical concert with video projections consistent with images in the poetry along with rare footage of Alexander reading her poetry.

An English professor at JSU from 1946 to 1979, Walker worked with the Federal Writer's Project alongside other legendary writers, the most notable being Richard Wright, in 1936. In 1942, Walker received the Yale Award for Young Poets for "For My People."

In 1968, Walker founded the Institute for the Study of the History, Life and Culture of Black People at JSU, now named the Margaret Walker Center. It is housed in Ayer Hall, the oldest building on Jackson State's campus. Dedicated to the preservation, interpretation and dissemination of African American history, the Margaret Walker Center seeks to honor her literary legacy and commitment to black studies with archival manuscripts and oral-history collections.

The center has four manuscript vaults, collections of Walker's personal papers, her journals and diaries digitized and available on the center's website (jsums.edu/margaretwalker). Robert Luckett, director of the Margaret Walker Center and assistant professor of history at Jackson State University, says that it is the second largest personal archives of a modern black female writer anywhere in the world.

The center engages the community through literacy projects and educational workshops and works with other JSU departments, including its partners: The Fannie Lou Hamer National Institute on Citizenship and Democracy, The Afro-Cuban Research Institute and The Veterans of the Mississippi Civil Rights Movement.

The center (1400 John R. Lynch St., 601-979-3935) will host a meeting of the Margaret Walker Center membership and a public forum discussing future growth and sustainability at 1 p.m. on July 7. "For My People" starts at 7 p.m. in the F.D. Hall Music Center Auditorium on the JSU campus. Admission is $20. For more information on this event or to buy tickets, visit the Margaret Walker Center online at jsums.edu/margaretwalker.