Band of the Day: The Weeks 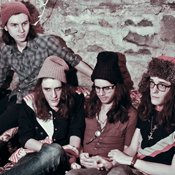 This Friday, The Weeks and Colour Revolt will grace the stage of Hal and Mal's. Both bands, due to scheduling conflicts, were unable to perform at Esperanza Plantation's Holiday Showcase in December and are now making up for it.

The Weeks, originally from the Jackson area, will play a mixture of old and new original songs. The band members spent the last two months writing new songs and recently released "Gutter Gaunt Gangster." The six-song album features the songs "Stigmata" and "Harmony."

The band is made up of vocalist Cyle Barnes, 21, guitarist Sam Williams, 20, bassist Damien Bone, 22, and drummer Cain Barnes, 21. Cyle, who writes all of the lyrics, studied creative writing in college and started working on longer pieces and short stories.

"Anytime someone brings you eight verses, you don't want to take anything away from it because it's so beautiful," Williams says. He flushes out the songs musically by giving a general sketch of how the song Cyle presented to him could go.

Aside from Cyle's college career, the band has also been influenced by a number of people and places. Williams took AP Music Theory from Dennis Cranford at St. Andrew's Episcopal School. "Dr. Cranford made a big difference in The Weeks' music. It got a lot more complex," Williams says. Bone also studied under Cranford, except at Belhaven University where he was studying bass guitar.

Being from Mississippi, The Weeks love to talk about the state. Many of the songs have direct references to living in the south.

"We like to be loud but our feet are firmly planted in Mississippi mud and we'll never sound like we're from anywhere other than Mississippi nor do we want to," Williams says. "We write songs about the things we love and Mississippi is at the top of that list."