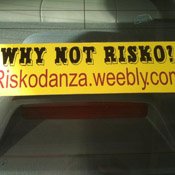 "The community has helped us out so much during our year together that we wanted to give back to them," Matthew Nooe says. "I chose Stewpot because I used to serve for them with my church when I was younger, and I think it's a really good cause."

Risko Danza is made up of Matthew Nooe, 19, on guitar and vocals; Jacob Lewandowski, 20, on bass; Kory Luckett, 19, on keyboard and background vocals; and Perry Townsend, 18, on drums. One year ago, Nooe, Lewandowski and Perry played a free show on the patio of Cups in Fondren.

"We were still not sure how we would do," Nooe says about the day. The three men worked on several covers and several original songs that Nooe wrote. "We surprisingly had a good amount of people show up."

Since then, Risko Danza has played numerous free shows at Wing Stop on State Street, Applebee's, Fuego and Sneaky Beans. The band plays a mixture of cover songs and original songs across the genres of jazz, blues, indie and hard rock.

"We really try to cover a wide range of music," Lewandowski says. "With the addition of Kory (Luckett) on the keyboard, we can get more versatile and really expand our style."

Lewandowski met Nooe in 2010 during a time when Nooe would often have jam sessions with his friends. Because Nooe needed another member to fully rock out, Lewandowski picked up the bass and has been playing since then. Nooe's dad, Grant Nooe, noticed Townsend playing the drums one day and introduced him to his son. Since then, the three have been producing music together.

"It's kind of hard," Nooe says about being so young in a music scene run by adults. "It's hard to get people to believe that we don't sound bad just because of our age."

Each band member brings something different to the table. Townsend cites the drummers of Led Zeppelin and Jay-Z as influences on his playing style, while Lewandowski thinks of Red Hot Chili Peppers. Pink Floyd and John Coltrane are collective influences on the band.

The charity event on Jan. 14 starts at 9 p.m. and costs $7. For information on Risko Danza, visit its Facebook page or riskodanza.weebly.com.