Everything You’ve Ever Wanted to Know About Voter ID Laws 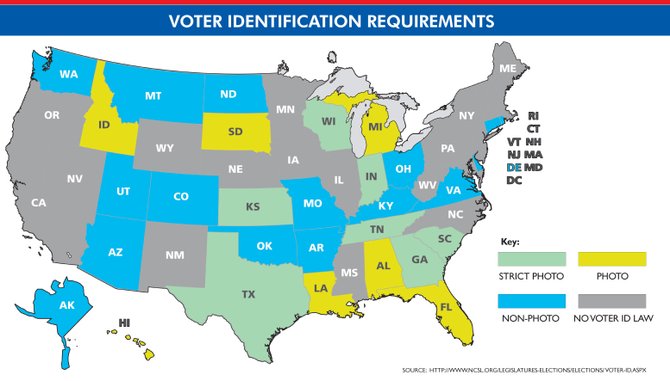 Thirty states have enacted laws that require citizens to present identification at the ballot box. With just over two months left before the Nov. 6 general election, it’s possible—although it appears less likely as Election Day draws near—that several more states could join that list. New Hampshire, Wisconsin and Mississippi all recently passed a voter ID law although the requirement has not bee implemented in any of those states. Mississippi, which has to obtain special permission to alter its voting laws, now awaits word from the U.S. Department of Justice on whether voter ID can take effect. The U.S. DOJ rejected voter ID in Texas and South Carolina. This map shows the nation’s 33 voter ID laws by strictness and whether the required voter ID must include a photo. Source: http://www.ncsl.org/legislatures-elections/elections/voter-id.aspx Photo by Courtesy NCSL 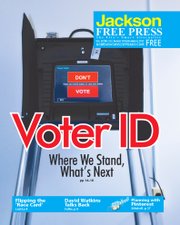 Editor's note: Propublica first published this story July 23, 2012, and has updated it with new developments.

Voter IDs laws have become a political flashpoint in what's gearing up to be another close election year. Supporters say the laws—which 30 states have now enacted in some form—are needed to combat voter fraud, while critics see them as a tactic to disenfranchise voters.

We've taken a step back to look at the facts behind the laws and break down the issues at the heart of the debate.

So what are these laws?

They are measures intended to ensure that a registered voter is who he says he is and not an impersonator trying to cast a ballot in someone else's name. The laws, most of which have been passed in the last several years, require that registered voters show ID before they're allowed to vote. Exactly what they need to show varies. Some states require a government-issued photo, while in others a current utility bill or bank statement is sufficient.

As a registered voter, I thought I always had to supply some form of ID during an election.

Not quite. Per federal law, first-time voters who registered by mail must present a photo ID or copy of a current bill or bank statement. Some states generally advise voters bring some form of photo ID. But prior to the 2006 election, no state ever required a voter to produce a government-issued photo ID as a condition to voting. Indiana in 2006 became the first state to enact a strict photo ID law, a law that was upheld two years later by the U.S. Supreme Court.

Why are these voter ID laws so strongly opposed?

Voting law opponents contend these laws disproportionately affect elderly, minority and low-income groups that tend to vote Democratic. Obtaining photo ID can be costly and burdensome, with even free state ID requiring documents like a birth certificate that can cost up to $25 in some places. According to a study from NYU's Brennan Center, 11 percent of voting-age citizens lack necessary photo ID while many people in rural areas have trouble accessing ID offices. During closing arguments in a recent case over Texas's voter ID law, a lawyer for the state brushed aside these obstacles as the "reality to life of choosing to live in that part of Texas."

Attorney General Eric Holder and others have compared the laws to a poll tax, in which Southern states during the Jim Crow era imposed voting fees, which discouraged the working class and poor, many of whom were minorities, from voting.

Just how well-founded are fears of voter fraud?

There have been only a small number of fraud cases resulting in a conviction. A New York Times analysis from 2007 identified 120 cases filed by the Justice Department over five years. These cases, many of which stemmed from mistakenly filled registration forms or misunderstanding over voter eligibility, resulted in 86 convictions.

An analysis by News21, a national investigative reporting project, identified 10 voter impersonation cases out of 2,068 alleged election fraud cases since 2000—or one out of every 15 million prospective voters.

One of the most vocal supporters of strict voter ID laws, Texas Attorney General Greg Abbott, told the Houston Chronicle earlier this month that his office has prosecuted about 50 cases of voter fraud in recent years. "I know for a fact that voter fraud is real, that it must be stopped, and that voter ID is one way to prevent cheating at the ballot box and ensure integrity in the electoral system," he told the paper. Abbott's office did not immediately respond to ProPublica's request for comment.

How many voters might be turned away or dissuaded by the laws, and could they really affect the election?

According to the Brennan Center, about 11 percent of U.S. citizens, or roughly 21 million citizens, don't have government-issued photo ID. This figure doesn't represent all voters likely to vote, just those eligible to vote.

State figures also can be hard to nail down. In Pennsylvania, nearly 760,000 registered voters, or 9.2 percent of the state's 8.2 million voter base, don't own state-issued ID cards, according to an analysis of state records by the Philadelphia Inquirer. State officials, on the other hand, place this number at between 80,000 and 90,000.

In Indiana and Georgia, states with the earliest versions of photo ID laws, about 1,300 provisional votes were discarded in the 2008 general election, later analysis has revealed.

As for the potential effect on the election, one analysis by Nate Silver at the New York Times' FiveThirtyEight blog estimates they could decrease voter turnout anywhere between 0.8 and 2.4 percent. It doesn't sound like a very wide margin, but it all depends on the electoral landscape.

"We don't know exactly how much these news laws will affect turnout or skew turnout in favor of Republicans," said Hasen, author of the recently released "The Voting Wars: From Florida 2000 to the Next Election Meltdown" (Yale University Press, 2012, $30) "But there's no question that in a very close election, they could be enough to make a difference in the outcome."

When did voter ID laws get passed—and which states have the strictest ones?

The first such law was passed as early as 2003, but momentum has picked up in recent years. In 2011 alone, legislators in 34 states introduced bills requiring voters show photo ID—14 of those states already had existing voter ID laws but lawmakers sought to toughen statutes, mainly to require proof of photo identification.

The National Conference of State Legislatures has a helpful breakdown of states' voter ID laws and how they vary.

What happens if a voter can't show valid photo ID in these states?

These voters are entitled to a provisional ballot. To ensure their votes count, however, they must produce the mandatory ID within a certain time frame and affirm in person or writing they are the same individual who filled out a temporary ballot on Election Day. The time limits vary: They range anywhere from up to three days after the election (Georgia) to noon the Monday after the election (Indiana).

Are there any exceptions to the photo ID requirement?

Yes: indigency or religious objections to being photographed. But these exceptions don't automatically grant a voter the ability to cast a regular ballot: In Pennsylvania and Indiana, voters will be given a provisional ballot and must sign an affidavit for their exemption within the given time frame. For a more specific breakdown of all exceptions, see the Brennan Center's state-by-state summary.

Why is the Justice Department getting involved in some cases?

Because of Section 5 of the Voting Rights Act, which requires that states with a history of discrimination receive preclearance before making changes to voting laws. Texas and South Carolina passed strict photo ID laws in 2011 but were refused preclearance by the DOJ, which argued that these laws could suppress turnout among minority voters.

Texas went to court recently seeking judicial preclearance from a federal district court; a three-judge panel of the U.S. District Court for the District of Columbia is expected to issue a decision by the end of the summer. South Carolina heads to oral arguments in the same court in September.

What about challenges to the laws?

On August 15, a Pennsylvania judge shot down an attempt to attempt to block the state's voter ID law. As we've reported, other judges have also ruled in favor of other states' voter ID laws. See the sidebar, "Pennsylvania is just the latest ruling upholding voter-ID law" for a rundown of the rulings.

The DOJ is also investigating many of the states' laws, including Pennsylvania's photo ID law. As first reported by Talking Points Memo, the DOJ's Civil Rights Division sent the state's chief election official a letter July 23 requesting 16 separate items, including the state's complete voter registration list, any documents supporting the governor's prior assurance that "99 percent" of the state's eligible voters already have acceptable photo ID, any papers to prove the state is prepared to provide registered voters with ID cards free of charge upon oath or affirmation, and any studies that inform state officials of the "demographic characteristics" of residents who lack valid voter ID.

The DOJ letter states it needs these documents within 30 days to evaluate the state's compliance with Section 2 of the Voting Rights Act, which forbids voting practices that discriminate on the basis of race, color, or membership in a language minority group.

Have any states attempted to enact strict voter ID laws but so far been unsuccessful?

Yes. In Wisconsin, two judges have blocked enforcement of the state's photo ID law. An appeal in one case won't be heard until after the November election. Meantime, Democratic governors in Minnesota, Missouri, New Hampshire and North Carolina have vetoed strict photo ID bills passed by their Republican-led legislatures last year.

Why has there been such a recent surge in voter ID legislation around the country?

The report, "Voting Law Changes in 2012" by NYU's Brennan Center for Justice, cites primarily big Republican gains in the 2010 midterms which turned voter ID laws into a "major legislative priority." Aside from Rhode Island, all voter ID legislation has been introduced by Republican-majority legislatures.

Republican figures have championed such laws. For instance, Mike Turzai, majority leader of the Pennsylvania House of Representatives, recently praised the state's legislative accomplishments at a Republican State Committee meeting last month. "Voter ID, which is gonna allow Governor Romney to win the state of Pennsylvania, done," he said.

A spokesman for Turzai, Steve Miskin, told ProPublica that Turzai was "mischaracterized" by the press. "For the first time in many years, you're going to have a relatively level playing field in the presidential elections" as the result of these new laws," Miskin said. "With all things equal, a Republican presidential nominee in Pennsylvania has a chance."