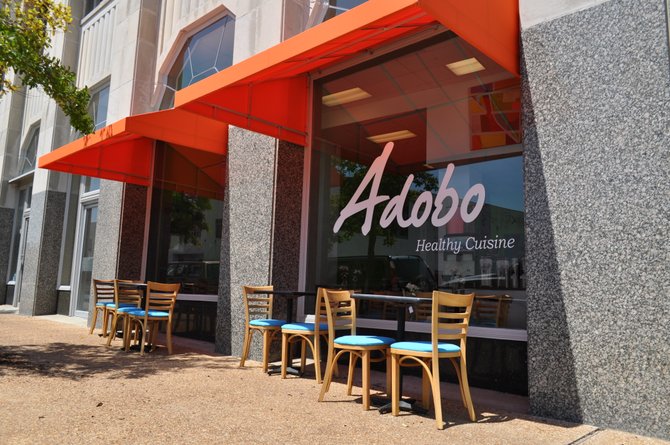 For the sixth year in a row, Mississippi has earned the title of the most obese state in the nation, according to The Trust for America's Health's annual study. Luckily, the state has people like nationally-acclaimed chef Luis Bruno and his business partner, Aimée Dickerson, who are committed to creating a healthier Mississippi.

For Bruno, a Brooklyn, N.Y., native, the restaurant is the culmination of a journey that started in 2003 when, he says, his health forced him to close his first restaurant in Jackson. Weighing in at almost 400 pounds and suffering from diabetes, liver disease, sleep apnea and numbness in his foot, he received grim news from his doctors: He had five years to live if he did not change his lifestyle.

Bruno rose to the challenge. Maintaining an 600-calorie-per-day diet, he lost 160 pounds in five and a half months. Almost a decade later and 200 total pounds lighter, Bruno just opened his second restaurant with the promise to make healthy food taste great.

With more than 30 years in the food business, Bruno is an experienced leader in the kitchen. Starting at age 12, he helped his family open three separate restaurants. By 1996 he had completed culinary school and landed a job as executive chef at the Mississippi governor's mansion for then-Gov. Kirk Fordice. After a short stint as Gov. Ronnie Musgrove's head chef, Bruno left the comfort of the mansion and opened his first restaurant under his name, Bruno's Eclectic Cuisine, in 2001 with his former wife.

Wooing another governor, Bruno joined then-Gov. Haley Barbour's entourage in 2004 where he stayed until 2009 when the Hilton Hotel near County Line Road hired him as its director of culinary development. In 2011, chef Bruno accepted the Mississippi's Museum of Art's offer to become executive chef at the Palette Café. Finally, after three governors, four restaurants, a hotel and a museum, he decided to open Adobo.

Bruno never believed he was going to open another restaurant, "I thought the first one was the last one," he said. "But then I moved downtown and saw this spot."

Located on the ground floor of the Standard Life Building at the corner of Roach and Pearl streets, Bruno's Adobo is now part of Jackson's downtown renaissance.

"I could have gone to Madison or Flowood, but downtown is going to blow up," he said. "I give downtown three, four, five years, and it is going to be exploding."

Adobo is so much more than healthy food prepared by a master chef located in the middle of downtown. The restaurant is heavily involved in the green movement in Mississippi, and could soon be the first restaurant in the state with a green certification from the Green Restaurant Association. They have applied for the certification and currently meet all the necessary benchmarks, Bruno says.

To earn and retain its certification, Adobo has to abide by rigorous standards: All tables, chairs and plates are made out of reusable materials; all plastics, glass, aluminum, cardboard and paper are recycled; dishes are prepared with organic and local food. And that is just a taste of all they do to go green.

"Adobo is eco-friendly to its core," said Dickerson, the restaurant's co-owner and 22-year veteran of the Mississippi Department of Environmental Quality.

Adobo is also a social enterprise. Bruno and Dickerson buy shirts from Gateway Rescue Mission for 50 cents, turn them inside out, and then print their logo on that side. Adobo will give the profits back to Gateway. Bruno believes it's a great deal. "When you don't want to wear the side that says Adobo, you flip it over and have a different shirt, so you get two shirts for one," he said. Because they omit the processing of new shirts, each shirt saves up to 700 gallons of water. Just by buying an Adobo shirt, you can support local cuisine, protect the environment and make a difference in the community.

Adobo serves affordable Latin food (from $8 to $12) with an Asian flare from 11 a.m. to 6:30 p.m. The restaurant opened its doors Aug. 20, relying on word-of-mouth and social media. "We have been a little busier than expected," Dickerson said, "but that is not a bad thing."

The partners plan to have three different "official" openings—one for friends and family, another for residents of the Kind Edward Hotel and the Standard Life building, and a third to celebrate Adobo's formal approval as a three-star green certified business, which they get once they accrue 175 points from the Green Restaurant Association. They already have more than 150.

Currently, Adobo is not open for dinner or on weekends. However, they do intend to offer free delivery for downtown residents and an array of daily ready-to-eat meals and hors d'oeuvres.

Adobo is located at 127 Roach St. in the Standard Life Building. For additional information, call 601-944-9501, or visit the restaurant's Facebook page.