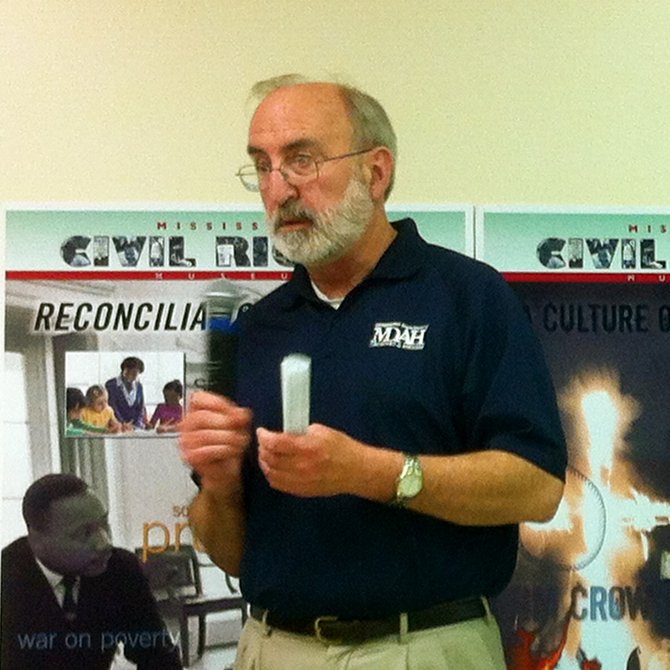 H.T. Holmes, director of the Mississippi Department of Archives and History, speaks to attendees at a community meeting April 4 in Holly Springs. Photo by Margaret Ann Morgan

It has been 50 years since James Meredith became the first African American student to attend the University of Mississippi. Until recently, Mississippi had no central location for celebrating this type of event, and so many others of its kind.

A team from MDAH is traveling the state this month to hold community meetings to get input from local citizens as to what they want to see in the museums.

"We need to hear of your experiences," MDAH Director H.T. Holmes said on the campus of Rust College in Holly Springs this week. "We want to tell the truth, but there's not one truth. It depends on where you live."

So far, the team has made stops at Tougaloo College, McComb, Hattiesburg and Itta Bena. The meetings continued this week in Holly Springs, on the campus of Rust College, with a diverse audience of about 30 people.

"We are telling Mississippi's story in our own voices," Holmes said.

With the help of former Gov. Haley Barbour and the 2011 Legislature, the museums have received $40 million in bond funding for their projects. However, the government will not provide all the funding. The MDAH crew traveling the state said Mississippians shouldn't take it personally--the economy and the access to funds do not allow the museums to be completely state funded.

The main concern of the planning committee is to make sure that this museum tells the stories of the people of Mississippi. "We can't tell the story without hearing your stories," Holmes said.

MDAH has partnered with the Department of Finance and Administration's Bureau of Building, Grounds and Real Property Management to oversee the construction of the museums. The two buildings will be placed side-by-side on state-owned land next to the William F. Winter Archives and History Building in downtown Jackson. Gerard Hilferty and Associates, based out of Athens, OH, will develop the museum exhibits.

"We really want people to feel the stories, not just listen to them," said Richard Wilcott, project manager and vice president of Gerard Hilferty and Associates. Wilcott said the museum exhibits will be hands-on, visual and interactive.

MDAH will travel to Gulfport, Cleveland and Philadelphia this month for more community meetings.

"Some of you may be concerned that you don't have anything of importance," John Fleming of Gerard Hilferty and Associates told the crowd in Holly Springs. "That's not true. ... All of you have something."