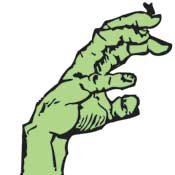 The Zombie Crawl Family Festival is from 5:30 p.m. to 7:30 p.m. on the Duling School east lawn. The festival is free to the public and features a children's costume contest at 6:30 p.m., a zombie costume contest at 7 p.m. and a pumpkin-decorating contest. Winners will be announced at 7:30 p.m. Plus, you'll find face painting, a space jump, treats and the Market
in Fondren.

For a small donation, you can get yourself "zombified" with makeup, props and old clothes. Y101.7 will be on site with a live remote and music. Be sure to stop by the other exhibitor tents.

The Zombie Crawl itself begins at 6 p.m. from Morgan Place, heads to Old Canton Road, heads to State Street via Fondren Place and ends up where it started. At 8 p.m., stick around the festival area to view "Night of the Living Dead" on the inflatable screen.