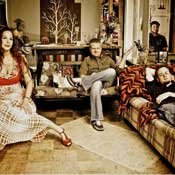 The members of Wooden Finger all have different ideas of how certain songs are going to sound when they come together to make music. They begin playing, and the creative process evolves the songs into something better than any of them had imagined.

"When people listen to our music, I want them to feel good about it, the same way I feel when I listen to music that moves me and makes me feel good," lead singer Allison Jenkins says.

Jenkins and guitarist Matthew "Moegeezy" Magee founded the group about seven years ago. Both had rich musical backgrounds with violin and voice lessons. They later added Ryan Baucum on bass, Chipp Burr on drums and Jason Daniel on guitar.

Wooden Finger just released its second full-length album on iTunes called "Take and See and Do What You Want." Jenkins describes it as more uplifting and rhythmic than the band's previous album. She says the older works are more ambient folk music and more melancholy than the newest record. The band recorded "Take and See and Do What You Want" at Sneaky B Studios, and Byron Knight engineered it. Roger Moutenot at Haptown Studios in Nashville, Tenn., mixed the sounds for the final product.

Wooden Finger's musical influences range from classical to jazz, and the members cite Arcade Fire as one of their inspirations. The band members express a deep love for music and an appreciation for the people who listen to theirs. "Most of all, we do this because we have fun playing music, and that's what matters," Magee says.