Deterrence: Not What You Think | Jackson Free Press | Jackson, MS

Deterrence: Not What You Think 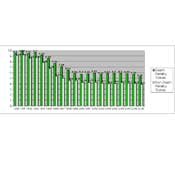 re·cid·i·vism noun \ri-sid-uh-viz-uhm\
a tendency to relapse into a previous condition or mode of behavior; especially: relapse into criminal behavior (Merriam-Webster)

Once a person has committed a crime and is in the prison system, what works and what doesn't to deter ongoing criminality?

Tough-on-crime policies—such as three-strike rules and truth-in-sentencing—and the war on drugs have given the United States the dubious honor of having the highest incarceration rate in the world: 743 prisoners per 100,000 people, according to 2009 Bureau of Justice statistics. As of 2008, one out of every 100 Americans was behind bars. In 2009, more than 7 million Americans were in the criminal justice system, either behind bars or on probation or parole. Research shows that as many as two-thirds of inmates will be back behind bars within three years of their release. (Source: Current Strategies for Reducing Recidivism, 2004, by Lise McKean and Charles Ransford, Center for Impact Research).

Q. What lowers recidivism?
Doug Hooley, a Lane County, Ore., corrections officer writes on CorrectionsOne.com that for a correctional system to be effective at reducing recidivism, it must adhere to three core concepts:
1. Collaboration between all criminal-justice partners
2. Organizational development—all organizations involved must buy into the plan.
3. All partners need to engage in evidence-based practices.

Q. Do stiffer sentences make a difference?
Probably not.

In 1999, Public Policy Canada looked at 50 research studies in an attempt to answer the question, "Does increasing the length of time in prison reduce the criminal behavior of offenders?" The conclusion? "Regardless of the type of analysis employed, no evidence for a crime deterrent function was found."

In 2006, Italy passed a Collective Clemency Bill. It freed all inmates with less than three years left on their sentences. The catch was that if they were convicted of any crime within the next five years, the remainder of the suspended sentence would be added to the new sentence. Officials found that:

• Inmates with longer sentences were less likely to reoffend.

In a 2009 paper titled "Lessons Learned about Reducing Recidivism from Research on Correctional and Juvenile Delinquency Programs," David B. Wilson of George Mason University concluded, "Overall, the current research evidence suggests that merely increasing the punitive nature of sanctions does not reduce future offending."

Q. Do trying juveniles as adults help prevent crime?
No. Research finds that sending minors to adult prisons increases their risk of re-offending, joining prison-based gangs, being abused or raped by adults and committing suicide. Studies, such as in Florida in 1996, started showing the recidivism risks of trying kids as adults in the mid-1990s—the same period that states started treating juvenile offenders as adults. Youth transferred to adult court in Florida were a third more likely to reoffend than those sent to the juvenile-justice system for the same crime and with similar prior records. Of those who committed new crimes, the ones sent to adult court reoffended at twice the rate of those sent to juvenile court. Over the last decade, many states (including Mississippi) have started to rethink the practice.

Q. Is the death penalty a deterrent?
"[G]iven the rarity with which executions are carried out in this country and the long delays in doing so, a rational criminal should not be deterred by the threat of execution. Despite increases in capital punishment in recent years, the likelihood of being executed conditional on committing murder is still less than 1 in 200," Steven D. Levitt wrote in "Understanding Why Crime Fell in the 1990s: Four Factors that Explain the Decline and Six that Do Not," published in the Journal of Economic Perspectives in 2004. He added: "[E]ven taking as given very large empirical estimates of the deterrent impact of the death penalty ... the observed increase in the death penalty from 14 executions in 1991 to 66 in 2001 would eliminate between 300 and 400 homicides, for a reduction of 1.5 percent in the homicide rate, or less than one-twenty-fifth of the observed decline in the homicide rate over this time period. Moreover, any deterrent effect from such executions cannot explain the decline in other crimes. Given the way the death penalty is currently practiced in the United States, it is extremely unlikely that it exerts significant influence on crime rates."

• Naci Mocan, professor at the University of Colorado at Denver, co-authored a study in 2003 that found five deaths can be avoided with each execution.

• In 2010, Mississippi was tied with Missouri for the third highest murder rate in the nation at 7 percent. Louisiana was first with 11.2 percent.

• In 2010, about 64 percent of Americans (surveyed by Gallup) are in favor of the death penalty and 29 percent are opposed to it, The New York Times reported.

Q. Whom Do We Execute?

• Since 1986, Mississippi has executed 15 men. Three of those men were black; however, only one of the 15, Leo Edwards, a black man, killed a black victim. One victim was Asian. All of the other victims were white.

• Mississippi's death row population is heavily skewed toward black men. The state has 55 men and two women on death row; 24 are white, 32 black and one Asian, according to the Mississippi Department of Corrections. Thus, 58 percent of the state's death-row inmates are black males, while the state's overall black population is 37 percent.

BTW, if you want to see the death penalty map at the top of this story in detail, you can view it here on page 24. (I've asked our tech gods here to make it pop out larger, but it might take a minute).