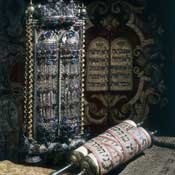 The Jewish concept of tikkun olam—repairing the world—comes from the Torah, which consists of the first five books of the Old Testament.

When we were first married and new parents, we made a conscious decision to embrace the Jewish practice of tikkun olam with its focus on action and justice. We believed it was important to model our faith for our children through our actions, and teach them the responsibility of tikkun olam, which, translated literally from Hebrew, means "repairing the world."

We were both children of the '60s, one raised in Boston, the other in Jackson, where we saw people denied their rights and privileges because of their race or religion. Here in Jackson, the Ku Klux Klan bombed the temple and the Rabbi's house in 1967. Our elders shared the horrors of the Holocaust with us. These historical events strongly affected us and influenced our faith and how we practice our Judaism.

Jewish religious beliefs are based on the existence of a singular God who is omnipresent and all-powerful. Humans, created in God's image, have an important power of choice in their actions, practices and beliefs in the observance of Judaism. The three primary tenants of Judaism all come from the Torah, or the first five books of the Old Testament. They are, in Hebrew: Tefilah, T'shuvah and T'zedakah.

Tefilah translates as prayer or observances of ritual practices and can include weekly Shabbat (Sabbath) services on Friday evening and Saturday morning as well as Jewish holiday celebrations and observances in the synagogue and at home.

T'shuvah directly translates as "return," but we commonly interpret it as repentance for past indiscretions and sins including confession of the sin, acknowledgement of the actions and concerns for its consequences, and a commitment to "return" to more ethical and moral behaviors as outlined in Jewish religious texts. T'zedakah is considered to be acts of charity, but a more liberal interpretation is individual and group actions within the community to enhance justice and equality for all.

In our personal commitment to practicing Judaism, the tenant of T'zedakah is a high priority. This is where we embrace the Jewish concept of tikkun olam. As Reform Jews, we believe each of us has a part in bringing about the Messianic Age where all of God's creatures are treated fairly and living in peace, where we've "beaten our swords into plowshares."

Working to repair the world includes making charitable contributions and participating in activities to bring about a just society. Some Jews consider this to be completing the act of creation. "You are not obligated to complete the work, but neither are you free to desist from it," we read in an important biblical Jewish text, "Ethics of the Fathers."

Everyone, therefore, has a responsibility to do their part to make the world better. Each generation builds on the good deeds of those who came before them.

Together, we chair the Tikkun Olam Committee at Beth Israel Congregation as we have for the past several years. The Temple is an adopter of our neighborhood public school, McLeod Elementary, participating during the year in a number of volunteer opportunities like literacy days and other events. Beth Israel members are actively involved in Stewpot Community Services, serving meals, making donations and generally supporting Stewpot.

The congregation has a history of involvement in the Civil Rights Movement, and we continue to rally around events that support equality and fairness, such as the recent prayer vigil in memory of James Craig Anderson. Our congregants and rabbi serve on many local civic and nonprofit boards. Through these and other justice-focused activities, tikkun olam continues to be an important part of the life of Beth Israel Congregation.

Dana and Jonathan, Thank you for the primer on these three Judaic principles. We Christians can certainly benefit from reminders of the roots and universality of God's laws, no matter the ritualistic particular's of, and variances in, how different faith's observe His laws. Your article also reminds us of the Judeo-Christian principles upon which our country was founded. Spiritually speaking, our Judeo-Christian ethics demand that we acknowledge and act in accordance with the principle that we are all ultimately our brother's keeper, no matter how fiscally conservative our politics.

I certainly applaud you and every like minded person on their efforts to bring about a just society and help for the less fortunate. As a Muslim, one of the three Abrahimic faiths, I also share a common bond. However to truly strike at the injustice of society we must take a hard look at what is happening and what we are doing. I believe our efforts are mainly maintaining the status quo. For example, feeding the poor and homeless at stewpot, the clothes closets, etc., etc., These are very helpful to the day-to-day living of those impacted, but does it change their condition? I would urge you, and others of influence to collectively engage businesses and professions to go out of their comfort zones and "hire" some people from this less fortunate group who may or may not be entirely qualified to give them a help "up". Use your congregation and form a job bank of those people that can give someone a job or those that may know of someone that would be willing to give someone a job. Encourage business, especially large corporations to build in the "inner city" and then hire a large swath of individuals from these neighborhoods so that they can work themselves out of poverty with dignity. And then assist these businesses with support groups for these individuals in order for them to be able to perform their jobs such as child care, transportation and the like. These type of large scale albeit difficult enterprises will go so much further in helping these targeted groups than merely passing out a hand out. "Teach a person to fish....?"