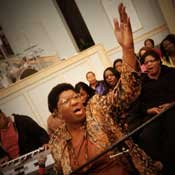 When Lannie Spann McBride speaks, her voice resonates with tones cultivated by a lifetime of singing the gospel. Her message of faith has touched the hearts of her students, and the hearts of people around the world.

McBride, 63, was born in Brandon and moved to Jackson after her father, Silas Lee Spann, began ministering at several Mississippi churches when she was about 6 years old. When she was 12, her father purchased a piano and told his children they were going to help with the music ministry at St. Mark Baptist Church in Brookhaven, planting the seeds of her musical calling.

McBride attended Tougaloo College where she received her bachelor's degree in music in 1970 and a master's degree in applied vocals in 1972. She also holds a master's in music education from Jackson State University, earned in 1982.

She began her music-teaching career at East Flora High School, and it eventually spanned more than 30 years in public and private schools. "I found a greater love of teaching after graduating," McBride says.

The educational experience should balance enjoyment with academics, McBride says. She writes music for the classroom that stresses self-esteem, racial tolerance and conflict resolution. Among the many musical teaching resources published through her company,  F & S Music KC Publishing Works LLC, she has written three books of raps that teach math and foreign languages.

"The challenge continues: to find songs that will teach (students) who they are, what they are and what they have the potential to be," McBride says.

Her talent landed McBride a part in the 1988 film "Mississippi Burning," filmed in Canton. Alan Parker, the film's director, asked her to perform a contemporary arrangement of James Cleveland's "Walk on by Faith," which is played over the closing credits.

More recently, in 2005, Jerry Smith, founding director of the gospel group Children of Israel, invited McBride to accompany him on two tours of Spain to sing. In 2009, she travelled to Jamaica with the Black Heritage Singular Singers Choir for a Hurricane Ivan relief effort sponsored by Wheaton College in Wheaton, Ill.

"There was a village where a church had been destroyed, and the only thing left standing was a cross," she says. "People were so appreciative of so little."

At the center of McBride's being is her life-long and powerful faith in God. "Everything I do is faith based," she says. "If I speak, if I sing, it's God working through me. I try to free myself so that he can flow through me."