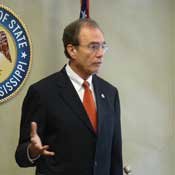 Secretary of State Delbert Hosemann's office left the cost of the three voter initiatives off the first absentee ballots produced.

"We are seeing minor problems and major turnout," Hosemann said in a news release, which outlined the following issues that have been reported to his office so far on Election Day:

- Reports also came in to Hosemann's office about lines at polls in Harrison County, which is using electronic poll books for the first time.

- In Washington County, one ballot style was not included on the county ballot in one precinct. Paper ballots are being used while the issue is being resolved.

Hosemann's assessment of minor snafus and large turnout was mirrored at the Warren A. Hood Library in Belhaven where election judge Henry Michel reported that one of the four voting machines wasn't working for about an hour before a technician arrived to replace it.

Michel, an election judge for 10 years, also reported surprisingly brisk turnout. By 10 a.m., about 200 of the precinct's 1,200 registered voters had cast ballots, he said.

Several voters at the library said they were spurred by a sense of civic responsibility more than interest in an particular candidate or issue. They did not give their names.