Murrah Coach off the Hook, For Now 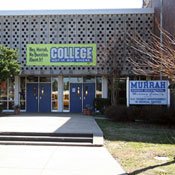 Judge Breland Hilburn dismissed the case, saying that there was not enough evidence to file criminal charges against the coach.

In October, the Jackson Public Schools District suspended Dorsey after a cell phone video showed him whipping students with a belt. Dorsey told the judge yesterday that he did not intend to hurt the players.

The school district banned corporal punishment in 1991. Dorsey still faces a civil lawsuit that a group of parents filed against him.