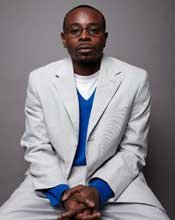 Cassio Batteast is slow to talk about himself, but his infectious smile and upbeat personality shine through as he talks about his experiences working with young men. Batteast, 31, is a case manager with Catholic Charities and the founder of Fathers Active In Their Hoods, known as FAITH Inc., a summer camp for men of color.

Batteast is a 2003 graduate of Tougaloo College with a bachelor's degree in child development and is currently studying at Jackson State University to get his master's degree in urban and regional planning. In 1997, at 18, he became a father. Growing up in a single parent home, Batteast and his four siblings had no example of what a father should be. Like many other new single fathers, he thought money could take the place of quality time. Batteast said his daughter, Lyniss, now 13, once called him by his first name instead of "Dad."

"I had to learn how to be a father," Batteast says.

Once he tapped into paternal side, though, Batteast became "Super Dad."

"We have a great relationship now; we talk about everything," he says.

Batteast also became a father figure to his sister's two sons when she was deployed to Iraq in 2008 until last December.

It was around this time that Batteast started FAITH Inc. FAITH is a male leadership development program. It provides young men with mentors, tutors, lifestyle classes and recreational activities. The program is year round.

One part of FAITH Inc. is the Knowledge Institution, a New Generation of Scholars, or KINGS. There five components within KINGS: a basic mentoring program; a college prep program; a support program for young men to stay in college; helping incarcerated males get their GED and re enter society; and Father University, a program that gives young fathers the resources Batteast didn't have when he was a young father such as parenting skills and job training.

Becoming a mentor for young males might scare some people but Batteast welcomes the challenge.

"I feel like everyone's a role model, regardless of if I didn't have the program, I'm still in a situation where there's going to be some young person that's gonna look to me, even if I don't want them to," he says, adding, "There is a lack of positive role models. Drug dealers are role models, too, but I consider myself a positive role model for young men and women."

Batteast says his passions are his daughter and his work with FAITH.

"Everything I do is for her," he says, later adding, "I truly believe we all have a moral obligation to someone else besides ourselves."

Love Cassio! If possible, he's an even greater guy than this article suggests. Always ready with a hug and a smile for a coworker. Two years ago my Mamaw made him a pecan pie and he's been an honorary "cousin" ever since! Good job, C! You are an AWESOME man.