Intimate Fundraising for the Arts 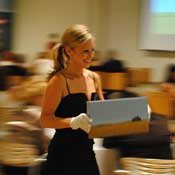 Joanna McNeel, former Mississippi Museum of Art registrar, shows a piece of art for bidding at the Art by Choice auction last year.

Susan Shands Jones stood in Steven and Erin Chevalier's home in Ridgeland admiring the fabulous art collection hanging on walls of every room, even the kitchen and back hallway. The Chevaliers told their guests the story behind how they put the collection together, beginning with a single landscape painting Steven got from his father.

It was a small gathering of 15 art enthusiasts in the Jackson area. The invitation called it a wine tasting and tour of a private art collection. More than that, the evening was a fundraiser for the Mississippi Museum of Art.

Jones, an attorney who works for University of Mississippi Medical Center, also collects art, and she supports the museum as a member. She has worked on the museum's acquisitions committee and joined the Collectors' Club, a group that meets regularly at homes of collectors or at local artists' studios. The small-event fundraiser at the Chevalier's home was one of five similar functions the museum held this year.

"It's a great idea to do this instead of waiting six months for a ball," she says.

Local arts groups best weathering the economic storm also credit their success to strategic financial management, active involvement of committed board members and a heavy dose of creativity to keep support dollars flowing. Membership fees and corporate sponsorships are standard fare for funding most arts organizations, but different and more aggressive approaches are required in times like these. Innovation, personalization and revision are key components in the structural backbone for arts fundraising efforts.

As a result, devoted arts patrons hungry for something different are getting it. They are served such innovative events as the Greater Jackson Arts Council's Storytellers Ball and the Mississippi Museum of Art's Dinners a la Art. Each represents a different twist in fundraising and an entertaining way for donors to experience the world of art, music or dance in a more personal and interactive way.

Kimberly Jacobs, community arts outreach coordinator for the Mississippi Arts Council, says that despite economic challenges, the arts are thriving just as they did in the Great Depression. "In the most difficult times, the arts build a sense of self-reliance and creativity," she says. That adaptation to the conditions is happening here in Jackson.

Jacobs knows this first-hand because her job requires face-to-face networking with local artists to develop a clear understanding of their creative vision and expression so that she can effectively showcase their work.

"I work as artistic director for the Arts Center and in a community-outreach capacity," she says. "We present a package of programs to our supporters and they can self-direct and designate their dollars accordingly."

Jacobs defers to Janet Scott, executive director of the Greater Jackson Arts Council and the Arts Center of Mississippi, as the absolute best when it comes to understanding the arts community, its focus, and the design and oversight of fundraising efforts.

How does one ask for money in this economy?

"We are not a museum. We are the process of art. Museums display the 'masters' while we showcase young, emerging artists and those with a unique perspective. Our corporate partners believe in our mission and have stayed with us, and we've even gained some new ones."

Grants are high on Scott's agenda as a critical source of new money coupled with tried-and-true events such as The Storytellers Ball, which Scott labels as "our biggest fundraiser." Now in its sixth year, the event's title draws from its organizational moniker, "Be a part of the story," and features a different theme each year. This year's theme is the '80s. Scott says a drawdown, or raffle event, held last year for the first time was a particular success because the winner donated all the proceeds back to the organization. The council's future fundraising plans include "more, smaller, personalized events."

Personalization is an increasingly popular approach to fundraising. An excellent example is the Mississippi Museum of Art's Dinners a La Art, a series of small, private events held in the homes, businesses or studios of MMA board members. Museum Director Betsy Bradley said in a telephone interview that her board president was looking for a way to get more board members actively involved instead of "just asking people for money."

A discussion of similar small fundraising dinners staged by the museum's auxiliary organization in the 1980s spurred the decision to revise that approach and resulted in the plan to have fun getting together at people's houses.

"The museum is always there to visit, but this is more personal, less institutional and all organizations are about people," Bradley said. Ranging in scope from elaborately themed dinners to a festive croquet game supper, the series is specifically designed to offer something for everyone.

Bradley acknowledged that the economy has presented challenges for MMA, but stressed that her donor retention  is good.

"Forging new relationships is a bit more difficult, and sometimes that means lowering prices a little, but it's not hard to get support for the arts," she says.

"We do so much educational work focusing on timely subjects that people understand that arts are critical even in tough times. What we need is more relationships and that just takes a little longer than usual today."

The museum's Dinner a la Art series created interest outside its regular list of supporters who attend fundraisers. People curious about art and intrigued by the small events wanted to come to learn about the collections or to hear artists talk about their work.