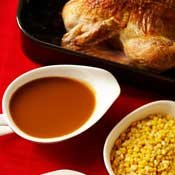 Chicken vegetable soup is a comfort food with healing properties.

Nothing warms a sickly body wracked with a cold or the flu like homemade soup. After putting up a small fight, we'll agree that soup sounds good at a time when nothing else seems to taste right. Soup nourishes our body's natural disposition to heal itself, and may actually help our ailing bodies create an environment that aids in the process.

But you don't need to be sick to enjoy soup. Include organic vegetables and whole grains to make soup a healthy meal year round, and especially when it's cold outside, soup can be a comfort-food staple.

Evidence shows that chicken soup—one of the classic favorites—might have an anti-inflammatory affect, according to the Nebraska Medical Center, by inhibiting neutrophil migration. Neutrophils are white blood cells found in abundance in our bodies when we are sick, especially when we have a bacterial infection. These cells travel to the infection site and attack the offending organisms to neutralize them.

The study shows that chicken soup excites these white blood cells and makes them more aggressive. Although it is still unclear what ingredients in chicken soup are responsible for the action, researchers concluded it may contain a number of substances with beneficial medicinal activity. Its mild anti-inflammatory effect could be one mechanism to mitigate upper respiratory tract infections.

People eat soup for breakfast, lunch and dinner in some countries like China and Thailand. It is a filling, inexpensive comfort food that exists in all cultures. Soups can be complex to prepare because each of the steps have to be done in a certain order with the correct ingredients. But some basic concepts for soup preparation ensure your creations will always come out right.

Begin with the stock, the most important part. By boiling fish, beef, chicken or any other animal flesh, we extract the components contained in it. For that reason, Asian and European cooks use parts that contain various components, including bones, skin and cartilage, in addition to meat.

I take great care with the meat products I use in soups, buying only organic or wild meat and fish, and I find out how the animals were raised, fed and slaughtered. Kosher butchering assures that no blemishes are present in your stock and that the most humane methods of butchering were used. When a chicken is boiled whole rather than just using breast meat (in Europe and Asia, they include the feet, neck and gizzards in their stock), you will have a greater amount of collagen in your soup and, generally speaking, the soup will have a stronger aroma and flavor.

Add vegetables in order by firmness to the hot stock. Add the firmest first—potatoes, carrots, celery and other roots. Add cabbage and other leafy vegetables toward the end. Although there is no evidence that the vegetables contribute to the beneficial effects of chicken soup, the vegetables give the soup substance and flavor. Many vegetables also have vitamins and minerals that can aid in the healing process.

Put in grains at the same time you add leafy vegetables. It takes about 20 minutes for both to be cooked. Grains give your soup specific flavor and thickness, and can add nutritional and healing properties.

Millet, for example, is rich in vitamins, iron, magnesium, phosphorus and potassium. It has a good amino acid profile, including the essential amino acids lysine and methionine. Lysine allows the body to heal and helps the immune response by creating antibodies.

Buckwheat is high in rutin, which has antioxidant qualities, and has been linked to helping patients fight cancer and inflammation. It also aids in cardiovascular health by building stronger capillaries, lowering blood pressure, reducing swelling in the legs due to venous insufficiency and lowering LDL cholesterol, thus aiding in heart health. Barley is another incredible grain that may lower sugars in diabetic patients.

Leave spices for last, and do not over boil. When you add spices, you add flavor and antioxidant healing properties, but overheating them can destroy the elements that make spices healthy. For several decades, scientists have been astonished by a low occurrence of cancer in the Thai population. Tom yum, a soup staple in the Thai diet, has spices that may have cancer-fighting effects.

Science has proven that hot soup, a complex meal, is beneficial to our health. Soups are easy to digest, get better with time, and in many cultures are an irreplaceable staple of daily life. During the cold and flu season, stay well and, please, have a bowl of soup.

Boil the chicken in a small amount of water for 10 minutes, and then discard the water. Wash the bird, and place it in a large stockpot with the purified water, one whole large peeled onion, 10 peppercorns and sea salt. Bring to a boil and simmer for at least 5 hours.

Strain the stock and reserve the meat to work with later. Return the stock to the pot, and add the potatoes and celery. Bring to a boil; reduce heat to medium and simmer for 10 to 15 minutes. Add the shredded cabbage, carrots, chopped onions, tomatoes, buckwheat and barley. Add the bay leaves and taste to see if you need to add salt.

Bring to a second boil, reduce heat and simmer for 20 minutes. Check to see if your grains and the cabbage are done. If done, remove the pot from heat and let the soup rest for at least one hour to see how the flavors combined.

Add the chicken strained out earlier back to the soup or use it in other recipes.