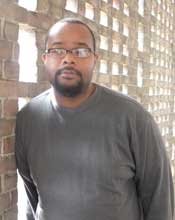 David Hoskins is used to getting strange questions. As the reference librarian at the Eudora Welty Public Library, he is the go-to guy for research materials and assistance.

David Hoskins is used to getting strange questions. As the reference librarian at the Eudora Welty Public Library, he is the go-to guy for research materials and assistance."The coolest thing today was a guy who called me and asked (what animal) would win a fight: a lion or a tiger?" he says. "It turns out that there are experts in robotics and zoology who run assimilations on things like that."

Hoskins sifted through the research and reported back to the patron with the verdict: The lion would win.

In April, Hoskin's accumulation of factoids earned him a spot on the game show "Jeopardy." Out of curiosity, the Batesville native took an online test to compete on the game show and soon, he received a call from a producer asking him to fly to Chicago and audition for the show.

"It took a minute to sink in. I thought I had misheard her or something, but then I realized that she wouldn't call me to fake me out," Hoskins says. "I've been watching that show for years so to get on it was a very big honor."

To prepare, Hoskins's coworkers helped him train by making flash cards and giving him random pop quizzes. He made it to the final question: The ivory-billed woodpecker and the coelacanth are examples of species named for this biblical man?

Under the bright lights with television cameras pointed at him, Hoskins searched for the right answer. Finally he made an educated guess: Noah. The right answer, however, is Lazarus because the animals are species that people thought were extinct, but actually still exist.

Since the experience, he has been a celebrity at home. His friends and coworkers recorded his episode of "Jeopardy," and watched it during a recent game night.

"I'm not used to this much attention, but I'm learning to be more comfortable with people coming up and talking to me," Hoskins says.

Hoskins, 32, received his bachelor's degree in English from Jackson State University in 2001. After graduation, he stumbled across a job listing with the library and has been there ever since. He is currently working on his master's degree in library science from the University of Southern Mississippi.

"I'm a natural nerd, so now I get to use my nerdiness for good," he says. "I want more people to know that (the library) is out there, and we have all sorts of information that people can use. The more people know what is at the library for them, the better off the entire community will be."

In his free time, the Belhaven resident enjoys local theater productions. "Jackson is really laid back," he says. "It has all the good stuff of a larger city, but it is really like a big small town."