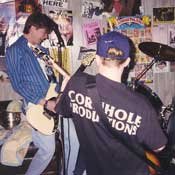 Courtesy of the Eunuchs

The Eunuchs, shown practicing in their garage, circa 1994. The reunion is Friday, May 28, at Ole Tavern.

"Is this gonna make me a dork again?" Drummer Josh Little asks as rehearsal draws to a close. Little is having self-deprecating second thoughts about The Eunuchs' reunion show on May 28. "It took me 15 years to overcome that," he says.

Bassist Jason Sickle and guitarist Carey Miller laugh and question the wisdom of the event, as well. The Eunuchs were born from the teenage catalysts of suburban boredom and involuntary celibacy. What if their name is a self-fulfilling prophecy?

A true teenage garage band, The Eunuchs began playing together at age 14 in Miller's garage. Their nitwit rave-ups soon began drawing throngs of kids to the Clinton driveway. But even with the undeniable lovelorn ode, "Christina Ricci," Eunuch groupies remained scarce.

Like most disaffected '90s teens, The Eunuchs were Nirvana fans. The band tracked down the records Kurt Cobain name-checked in interviews, which led them to Mudhoney, The Wipers and ultimately the wailing Northwest garage rock of The Sonics. They soon sidestepped the malaise of grunge in favor of hopped-up, lowbrow rock 'n' roll.

But the band's origins are steeped in much deeper popular culture. Miller and Sickle met on the school bus when Sickle spotted Miller's collection of Garbage Pail Kids stickers. That was second grade, and they've been best friends ever since. Skipping ahead to age 14, they meet Little at The Backdoor, an all-ages club in Brandon. He and Miller were wearing the same Mudhoney T-shirt. The zeitgeist was born.

The Eunuchs' first show was a sweet-16 party. As the guests cleared the ballroom, The Eunuchs attempted to cover Dead Boys and Stooges songs while their then-lead singer banged on a steel washtub.

The poet departed the band soon after, and the remaining Eunuchs began working on original material--blistering trash rock with a little surf and hardcore in the mix.

Miller laid out their approach: "We either wasted time practicing or playing 'Street Fighter 2' at the bowling alley."

With a lack of girls and an abundance of inside jokes, they quickly amassed piles of homemade recordings. So Sickle started his own label, Blahhll!!!, to release their overdriven discography.

One of these tapes made its way to Eric Friedl, founder of Memphis' Goner Records and a member of The Oblivians.

"He didn't like it. But I guess he liked it enough to pass along to Jay (Reatard). He called my house, and my mom tells me 'Jay Reatard is on the phone,'" Sickle says.

Reatard was bashing out his own high-velocity, low-fidelity recordings at the time, and offered to bring his gear down to Mississippi and record The Eunuchs. He managed to capture the full scuzz and howl of The Eunuchs sound. Reatard even wound up penning lyrics and handling vocals on "You Must Hate Yourself."

While in town, Reatard also recorded Crystal Springs greasers Not Dead Only Frozen. Their revved-up rockabilly fit well alongside The Eunuchs. The bands released a split 7-inch EP and shared stages.

A Chicago label offered to release a Eunuchs LP. But just as the world outside Clinton began taking notice of the band, the Eunuchs themselves began losing interest. Little was also playing with The Caffiends, soon to become The Comas. Miller was distracted by college life at Millsaps. Neither Miller nor Little could be bothered to show up for the record sleeve photo. So Not Dead Only Frozen's Justin Manning donned a wig to act as a stand-in

Years later, on tour with the Tuff Luvs, Miller found himself at a house party in Orlando. "Some guy started playing The Eunuchs record, and I was like 'That's my band!'" Miller says. "He looked at the cover, and said: 'No it's not. Which one's you?'"

In honor of what turned out to be a posthumous LP, The Eunuchs made the trip to Chicago for a farewell show. With Little in exile, Reatard filled in on drums. "That show ended with Jay naked, smashing the p.a. on the ground while the guy that owned it screamed 'noooooo!'" Sickle says.

In the years since, The Eunuchs all continued playing music in various Jackson bands including Tuff Luvs, Atomic Brains and Hank Overkill.

The Eunuchs have a lot to live up to--and live down--this Friday night. Who knows? Some girls might even talk to them this time out.

The Eunuchs join Not Dead Only Frozen for a double reunion at Ole Tavern, Friday, May 28, starting at 9 p.m. The last copies of The Eunuchs LP (recently discovered under Jason Sickle's bed) and an eBay smashing rarities CD will also be available.