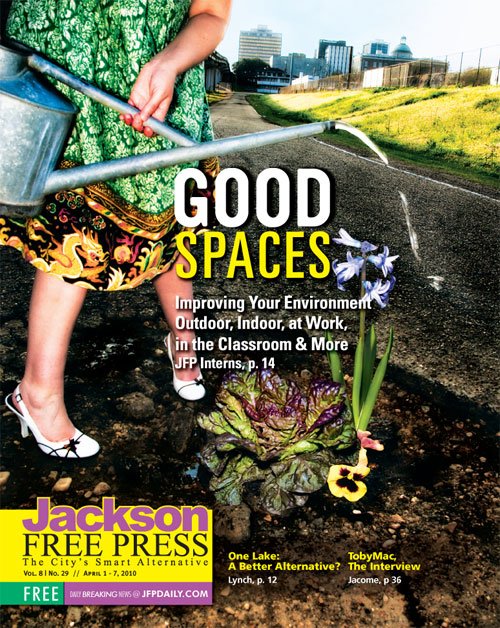 Whether it's inside our homes, at our workplaces or where we spend our free time, our environments have a big impact on our quality of life. In order to change and improve our city and all the spaces that we touch and inhabit, it's important to evaluate them and seek out innovative ways to improve them. This GOOD issue presents successful models and ideas from other cities and ways to use them to shape the way we think about and interact with our environments. For more Good things to read, head over to the JFP's Good Blog and see what good you can do.

Confluence Greenway
Begun in 1997, the Confluence Greenway is a 200 square-mile network of parks and trails in the St. Louis, Mo., region. The Greenway connects the ecosystems surrounding the confluence of two of America's largest rivers—the Mississippi and the Missouri—to the downtown St. Louis riverfront. More than simply connecting bikers and outdoors enthusiasts, though, the Greenway promotes a broader view of the cultural and historical attractions situated around the river's confluence.

Living River
After previous attempts in the 1970s and 1980s fell through, in the mid-1990s, Napa County, Calif., took a new approach to flood control along the Napa River. A coalition of groups, encompassing city and county government, business interests and environmental organizations, developed a vision of flood control with a "living river" design. The Napa River Flood Control Project preserves the river's natural depth and slope while using riverbank terracing, a dry bypass channel and new wetlands to mitigate flooding. True to its name, the "living river" design also calls for trails along earthen berms that top the riverbank terraces. Napa County has funded local contributions to the project since 1998, when voters approved a half-cent sales-tax increase.

Connecting to the River
Mill River runs through the heart of Stamford, Conn., but for years, the river offered little more than the threat of flooding to local businesses and residents. With a growing downtown business district and residential development continuing in the floodplain, the Mill River Park Master Plan arose in as an attempt to re-connect Stamford residents to the river while containing floodwaters. When completed, the 28-acre park will feature native vegetation along the river's natural channel, and an array of recreational infrastructure, including extensive walking and bike trails, a carousel, a skating rink and a playground. A product of collaboration among multiple entities, including government and business, the master plan encompasses four themes or ways of connecting to the river: experiential, educational, recreational and ecological.

Complete Streets
As their name suggests, complete streets designs provide save use to all people: car drivers, cyclists and pedestrians of all ages and abilities. They aren't one-size-fits-all designs, but an approach to making thoroughfares accessible in appropriate ways. "Completing" a downtown avenue may call for a concrete median, bike lanes and well-designed curbs. A residential street may only need sidewalks, and a rural road may simply require a wider, paved shoulder to be more accessible. Complete streets are safer for all travelers and—especially in urban situations—encourage and support walkable development.

Using Unused Space
Jackson architect Arthur Jones has had his eye on an overgrown triangular lot in downtown Jackson for years. The open space bordered by Court and Roach Streets, belongs to the Kansas City Railroad Company, which has held on to the property for years with the somewhat hazy future intention of building a switching station there. Jones has dreamt of mowing the lot and using it to hold open-air music events. The city is on board, he says, but the railroad company has been nearly impossible to sway.

Green Space For Pets
Thriving communities and neighborhoods know that green space isn't just for humans. Pets need a place where they can run freely with their owners. Many cities like Jackson require leashes on dogs at all times, but dog parks provide an exception to that rule. In Belmont, Pa., residents held community meetings and started a petition supporting a dog park. After seeing the public support and need for the park, Belmont city council members secured funding for a public dog park.

Green space—whether a park, community garden, vegetation in a roadway median or open land around a city—is something many communities fight to protect and increase. Instead of developing in an urban-sprawl pattern and destroying surrounding green space, cities should focus on bettering existing city infrastructure and design, and on making the city more accessible. An increased amount of green space benefits the environment and also makes those who live around it happier.

Use unusual spaces for gardening: San Francisco Mayor Gavin Newsom started a garden in front of City Hall and a strawberry patch on top of a bus station.

Petition the city for more parks and outdoor recreational areas in the city.

Green your roof, whether by covering the whole roof with sod and plants or just having a few containers of plants. Plants benefit the environment and can provide a source of fresh foods.

How to establish UGBs
1. Have a vision and gather support.
2. Conduct surveys and a general audit of land use.
3. Create a map showing land to protect and land to be developed.
4. Conduct a specific audit.
5. Propose an ordinance update.

Living less than .62 miles from a green space improves your health.