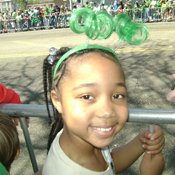 Being more Irish than the Irish themselves isn't the only reason for thousands of people in Mississippi to make their way to Jackson for the 28th annual Mal's St. Paddy's Parade on Saturday. Some of the proceeds from the event benefit the Blair E. Batson Hospital for Children, the only children's hospital in Mississippi.

"It's one reason people get involved," said Matthew Johnson, coordinator for the Children's Miracle Network at Batson Hospital. "Some people want to do it to help the hospital, others just enjoy being a part of the parade and festivities."

Not only does the hospital receive proceeds from the float entries, which are tax deductible, radio personalities from local stations and volunteers sell bead necklaces for $1 and T-shirts for $5 during "The City Sweep" before the parade. All money collected from this helps the hospital as well.

Blair E. Batson is a teaching and research hospital that relies on the support of individuals and others to help children get the care they deserve. Its mission is to treat all children regardless of their ability to pay. The money that the hospital receives helps provide "whatever the needs the children have … (and funds) top-of-the-line equipment to better (diagnose and cure) the illnesses of these children," Johnson said.

Some of the money also goes toward the Patient Need Fund to assist families that bring children to the hospital for treatment from different areas of Mississippi.

Although the hospital holds no official activities during the St. Paddy's weekend, Johnson says that many families are grateful for the support the hospital offers, financially and emotionally.

Mal's St. Paddy's Parade has turned into an internationally known event from a mere pubcrawl 28 years ago.

"The parade celebrates cultural heritage, a sense of place, a sense of humor and gives metro Jackson a taste of civic pride," said Malcolm White, founder of the parade. "It is not only the largest one-day celebration in town, but it is uniquely Jackson's own personality on display for the world to see."

To make a contribution to the Blair E. Batson Hospital for Children, visit http://www.childrenshospital.umc.edu/donate.