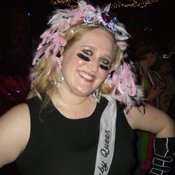 Natalie Long, a 33-year-old unofficial Sweet Potato Queen wannabe, is geared up and excited about this year's Mal's St. Paddy's Parade. The Mississippi State grad and Bogue Chitto native has been attending the parade for 10 years now. "A kid at Christmas" is how she feels every time the parade is about to start. She's a part of the Capitol City Roller Derby Queens of Jackson, and although not as seasoned as some other Jackson natives, she has had her share of experiences during past parades, and with her "other" life as a third-grade school teacher.

How did you become interested in becoming a Sweet Potato Queen?
I read the first book by Jill Conner Browne. I've read all of them. And I became a big fan of them. And I that's how I got involved, started going to the Sweet Potato Queen balls, not really participating as far as being a wannabe, but more so just going solo or with friends and having a good time.

Tell me about your queenly journey.
I'm just a wannabe. We're not quite inaugurated into being a part of Jill's crew. There are a zillion chapters all over the world, and everyone, I'm sure, has their own head Queen. It's just lots of fun. Lots of female camaraderie and having fun, it's just great.

How do you all try to recruit other women to join your chapter? Once you all get someone that wants to join, is there an initiation process?
Really, we haven't done anything as far as recruiting. Now if anyone wants to join, then that's fine. But when you have such a great group of girls you don't want to mess that up. We don't really have an initiation process. As long as you are fun loving, have a great attitude and like to have fun, that's our only stipulation.

Any interesting situations that you can remember that have happened during the parade?
The kids that I taught last year, they saw me on the float, and they went absolutely crazy. And they were just screaming my name and saying, "Throw me some beads, Ms. Long!" And when they came back to school that Monday, they had their beads on, and they were just so excited and asking, "Did you see me? Did you see, me Ms. Long?" It was kind of a touching thing for me to see them and have them yelling for me and stuff. So that was kind of cool.

How do you get prepared for the parade?
Last year I joined the Verde Do Krewe float, and we build the float in January. Our theme is "The Addams Family." You'll have to come check us out.

Have you all had anything terrible happen while on the float during the parade?
No, this is only Verde Do Krewe's third year. And as far as I know, nothing wrong has gone on. This year, me and my band, Natalie Long and the Longshots, are going to be singing on the Verde Do Krewe float, and we're going to be doing rock 'n' roll, and we're so excited. We are the only float that's going to have a live band on the float.

Is there anything else that you do in the community?
I host singer/songwriters night at Hal and Mal's, and that's once a month.