The state is set to execute death-row inmate Joseph Daniel "JoJo" Burns this evening at 6 p.m. 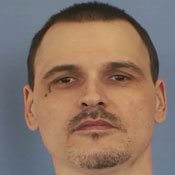 The state is set to execute death-row inmate Joseph Daniel "JoJo" Burns this evening at 6 p.m.

A jury sentenced Burns to death in 1996 for the 1994 murder of Floyd Melvin McBride, a Tupelo hotel manager. In 1999, Burns exhausted his direct appeals, challenging the conviction at the state level. Burns then filed a request in October 2001 for a new hearing in Lee County Circuit Court, arguing that errors by his trial attorney entitled him to the hearing. In April 2002, the state Supreme Court granted him the hearing on limited grounds, but the Circuit Court upheld his death sentence. Burns appealed again, but the state Supreme Court denied his post-conviction petition in 2004.