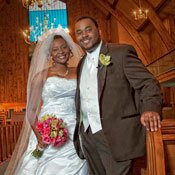 "Someday, Demetria, you and Chris will be married." Virginia Williams spoke these prophetic words to her granddaughter, Demetria Robinson, in the fall of 2004. Demetria, however, snickered at the comment because she had just started dating Chris Thomas.

Watching movies is one of Demetria's favorite pastimes. In August 2004, she strolled into Hollywood Video in Jackson to pick up the romantic comedy, "13 Going on 30," when a gentleman on top of a ladder captured her attention. "Don't I know you from somewhere?" she said.

"Yes," Chris said with a smile.

Slowly walking away, Demetria smiled at Chris with her eyes and started conversing with a girlfriend.

"You're so dressed up and no place to go; do you have a man to take you out?" Chris asked. "No," she replied with what she now calls an "arrogant" attitude. Chris handed her a receipt with his number on the back. With no intention of contacting him, Demetria tucked the number into her purse and walked away.

Chris anxiously waited one week and then looked up her telephone number in the store's database. When he called, Chris was hoping to hear Demetria's sweet tone. To his surprise, he was greeted by another man's voicethat of her dad, Rev. James Shoulders. Stuttering, Chris informed him that Demetria had a late video. Even though she was notorious for having overdue movies, Demetria called Hollywood Video "fuming."

"There must be a mistake," she explained. "This movie was returned on time!"

"I'm sorry," Chris said sheepishly. "There aren't any late fees, I just had to get in contact with you."

The Inseparable Twosome
During their first telephone conversation, Chris captured her heart. Demetria had two requests: First, she told him, they had to refrain from premarital sex. Chris' reaction amazed her: He agreed to honor her wishes and did not pressure her.

Secondly, before their first date, he had to meet her parents. When he did, his manners and respectful attitude toward Demetria won over her father and her mother, Diane Shoulders. The new couple spent so much time together her mother nicknamed them "Mutt and Jeff" after the inseparable comic-strip characters.

At Jackson State University, which they both attended, Chris majored in accounting and Demetria in English. They discovered they both love to travel, try new cuisines and watch old sitcoms, such as "The Cosby Show" and "A Different World."

The Proposal
Four years later, in September 2008, they were still just a dating coupleat least that is what Demetria thought. Chris was full of unexpected surprises for her 25th birthday bash, where he invited all her friends to watch him pop the big question in a reserved room at Biaggi's Ristorante Italiano in Ridgeland. When it came time for her to open her presents, Demetria's parents lured her outside with the prospect of a new car, giving Chris an opportunity to prepare for a proposal.

Once outside, Demetria's mother blindfolded her and led her back to the restaurant. When Demetria's mother uncovered her eyes, the song "You for Me" by Johnny Gill was softly playing, and Demetria noticed Chris had lined the party guests in wedding formation along both sides of him.

On one knee, Chris asked, "Will you marry me?" She was too shocked to cry.

A Dream Come True
After graduating in September 2007, Chris had taken a job in Memphis, where he worked as an internal auditor for Federal Express, while Demetria stayed in Jackson to work on her master's degree in Education at Jackson State.

While this presented an extra challenge to their already demanding schedule, the couple got creative with their wedding plans. They snapped digital photos of everything from save-the-date invitations to candle décor. They sent the pictures back and forth via e-mail and made decisions during evening phone calls.

The couple understood their mission with clarity: to bring together two ideas and convert them into one.

Even though Chris, 24, is a planner, he discovered the best solution to long-distance planning: "Just say 'OK, honey' and 'let me know what it costs.'" Chris gave Demetria, 26, the freedom to choose, but would step in when she was feeling overwhelmed.

On Oct. 17, 2009, 200 guests filled Morning Star Baptist Church while gospel music played. An array of pink roses was scattered in the aisle. The day went as they had imagined: lavish and no tears. "We wanted our guests to see the fun, unpredictable side of us and feel the love we shared," Chris said.

Instead of traditional black, Chris chose brown tuxedos, and Demetria selected brown bridesmaids' gowns to complement their fall event. During the ceremony, the couple took communion to symbolize saying goodbye to their past and stepping into their new life together.

At the reception at the Embassy Suites in Jackson, the bridal party posed for their last group photos as reception guests ate fruit and cheese. While enjoying their fellowship time, the guests watched a film capturing Chris and Demetria's love story, produced by videographer Johnny Coleman. The video ending was timed perfect for the couple's grand entrance as husband and wife in the light from a black disco ball.

After a five-course meal, a three-tier stacked vanilla and strawberry cake topped with a cymbidium orchid and dancing, the newlyweds left for their seven-day Hawaiian honeymoon. They now live in Memphis.