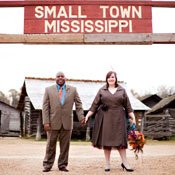 Anna Kline and Walter Biggins were married Nov. 28 at the chapel at the Mississippi Agriculture Museum.

A love of art and culture brought book editor Walter Biggins and singer-songwriter Anna Kline together. In 2008 Anna was working as the coordinator for the Crossroads Film Festival when she met Walter, who volunteered at the festival to screen films.

Anna, who now works for the Mississippi Office of Film and Culture, and Walter, an editor at University Press, were in the same place concerning relationships: tired of them. They both were taking breaks from dating.

One of the first things Anna noticed about Walter was his "sardonic" sense of humor and his artistic taste.

"Walter is a huge silent film fan, and I am a fan of 1920s fashion and music," Anna says. "I enjoyed talking to him and learning new things."

The fact that they are an interracial couple did not prove the barrier some might think it would be. Walter, who grew up in an interracial family in Dallas, said Anna's parents who are from Hernando, have been very gracious to him. "Her dad even showed me his vintage tractors," Walter says.

After dating for about a year, things started getting serious, and Walter unofficially asked Anna for her hand in marriage during dinner one evening. A few weeks later, they took a trip to New Orleans on Memorial Day where Walter proposed with a ring at the Court of Two Sisters restaurant on Royal Street.

They married Thanksgiving weekend 2009 so both their families could be in town. On Nov. 28, they exchanged vows in the white clapboard chapel at the Mississippi Agricultural Museum. It was originally an Epiphany Episcopal Church built in 1843 that was later razed and moved to Jackson.

Inspiration
While living in her Belhaven garage apartment, Anna would frequently hear an owl hooting outside her window. Months later, while she and Walter were taking a walk together in Laurel Park, a hoot owl flew through the treetops. The couple decided to name it Hugo and have considered the owl their friend ever since.

Hugo became the inspiration for Walter and Anna's wedding theme.

The couple created their own unique wedding invitations, with an image of an owl. To cut costs even more, Anna used her own calligraphy skills to address the envelopes.

To create a woodsy, outdoor feeling, the couple chose brown and turquoise as their color scheme. Anna made the arrangements they used on the altar out of moss and feathers. A feather wreath welcomed guests into the chapel.

Anna wore a tea-length brown dress she found in a bridal shop, originally a bridesmaid's dress. She had a seamstress add some tulle to the bottom of the hem to make it more original. She wore a birdcage veil, which she adorned with sequins and bird feathers. To ensure "something blue," she wore teal pumps. The bridesmaids wore unmatching dresses in their choice of jewel tones.

Walter chose a brown suit and turquoise shirt, and the groomsmen wore suits of their choice, with matching turquoise ties.

The traditional Methodist service was balanced with a bit of the nontraditional. The couple's recessional was the theme from "Charlie Brown's Christmas," a jazz tune called "Linus and Lucy," composed by Vince Guaraldi.

Of Owls and Tex-Mex
No place could have been more fitting for the reception than the Northpointe Red Barn off Old Canton Road in Jackson. Tex Mex appetizers welcomed the guest, a nod to Walter's Dallas childhood home.

As homage to Walter's parents, who both work for the U.S. Postal Office, a mailbox sat in the center of the first floor surrounded by postcards. Walter and Anna bought vintage cards through eBay and encouraged guests to send warm wishes to them.

Up the stairs, on the second level, twinkling white lights were strung around the dance floor. Feathered, handmade balls dangled from the lights alongside sheets of music cut in the shapes of owls. Tables held tall glass tapers with candles and feathers. The couple designed and made all the decorations at the reception; family and friends had helped the couple decorate the day before the ceremony.

The meal was a continuation of the appetizers downstairs with a taco/quesadilla bar. In lieu of a wedding cake, the couple had red velvet and German chocolate cupcakes placed on a table of moss and woodland animals, accompanied by Champagne.

Daniel Guaqueta, of Guaqueta Productions, was the deejay for the reception, playing a variety of music including classic '60s soul, R&B and funk musicfavorites of Anna's. To impress the crowd, Walter and Anna had taken dance lessons for a month before the wedding. At the reception they danced the West Coast Swing to "Soulful Strut" by Young-Holt Unlimited.

The couple left in a cloud of bubbles blown by guests. They planned to spend a night away from home at the Cabot Lodge in Millsaps and in the spring take an extended honeymoon in Europe.

If anyone would like to look at more pictures of our wedding, here is a link to the slide show: http://erinfults.myshowit.com/annaandwalterwedding

What a gorgeous slide show, Anna! Your wedding was clearly just delightful and creative. Congratulations to you both!

Thanks, Donna - y'all did such a great job on this issue!

You're welcome. That was mostly ShaWanda and Lacey, though--our resident superstars. ;-)

It was a fun wedding, for sure! I enjoyed reading about it again.

Didn't make it to the wedding, but these two are such a cute couple. I'm sure it was very exciting. Congrats Anna and Walter! OH and the slideshow....AWESOME!!! Wish I had thought of that.