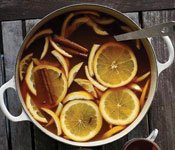 Some holiday get-togethers are light-hearted and festive, and booze flows freely among friends. Other gatherings are a bit more begrudging, and alcohol becomes the lubricant for surviving hours of enforced frivolity without stabbing Uncle Charlie with a meat fork when he makes the fatal mistake of bringing up politics at the dinner table.

Whatever your need, here are a couple of my family's favorite holiday libations, along with non-alcoholic versions for that designated driver you'll be sure to include.

My grandmother's Sneaky Pete is a Christmas imperative. It's like a grown-up slushie. Tart and delicious, it earns its "sneaky" name because the punch from the alcohol sneaks up on you, so drink it slowly. Be sure to plan ahead for this one; it takes a day to freeze because of the high alcohol content. Be sure to choose vodka of 80 proof or higher, or you could end up with a solid Sneaky Pete-sicle instead of crystallized slush. Kids love a Not-So-Sneaky Pete, too. Just substitute the vodka with equal amounts of additional soda for a kid-friendly version.

Another family favorite is hot mulled cider; it's spicy and sweet, and warms you from the inside out. The aroma that fills your home while it mulls is absolutely heavenly. A crock-pot is perfect for this recipe, but a large pot on your stove top works equally well.

To begin, stud the outside of one whole orange with whole cloves. Add it to the cider in a large pot. (You could add the cloves directly, but studding the orange means you don't have to fish cloves out of your mug.)

Thinly slice the remaining orange and half of a lemon and add to the cider along with the brown sugar, cinnamon and allspice.

Allow the cider to mull for two to four hours on low, stirring once warm to be sure the sugar dissolves properly. Add the alcohol of your choice just before serving, or leave the bottle next to the pot for guests to add as desired. Garnish each serving with a cinnamon stick.

In a large container, mix thawed concentrates with cranberry juice and sugar until no lumps remain. Add soda and then vodka to taste. (My family generally uses the whole bottle, but we're a daring lot.) Freeze, stirring occasionally, for 24 hours or until slushy.