In Search of Place 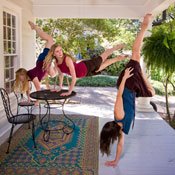 When Jamie Weems was touring Europe last year, unexpected detours became some of the most memorable experiences from his trip. Those moments inspired him and his band, Strange Pilgrims, to produce a body of music.

But his desire to explore that theme didn't stop there. On Dec. 3, Weems and a several Jackson artists will collaborate during "thisLocation," an exhibit showcasing art, music and dance inspired by the essence of space and memory.

The event features photography, visual art and film from local artists Meredith Norwood, Alexa Crane, Spence Kellum, Jacques Murphree, Aaron Phillips and Robby Piantanida. The centerpiece of the event is a dance performance by Front Porch Dance. The dance company collaborated with the Strange Pilgrims during "Mobiles," a collaborative exhibit in September 2009. Front Porch Dance member Krista Bower said the December performance includes six dance members, five of whom choreographed the dance, and will explore the exhibit's theme to the Strange Pilgrim's music.

"It's great a development from our first attempt at such a collaborative event," she says. "We have learned a lot through the process and are able to communicate more clearly and play off the experience we gained producing the ‘Mobiles' event."

Bowers says collaborative art performances not only provide an outlet for different artist to performance, but it is a way to explore other media.

"I think there is so much we can learn from one another across disciplines," he says "We have learned a lot about music composition. There was so much I didn't know. Being able to talk to Jamie about how he develops the music and themes, ... I think it just helps us to be better-informed artists."

Catch "thisLocation" Saturday, Dec. 4, at the North Midtown Arts Center (121 Millsaps Ave.). An artist reception starts at 7:30 p.m., and the performance begins at 9 p.m. Suggested donation is $7. An encore matinee performance is Sunday, Dec. 5 at 2 p.m.