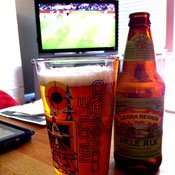 Fall is just around the corner, and with it comes the unique challenge that men such as myself face every year—how to talk football when you don't religiously watch the sport. For me, being a hard-core fan of a team means knowing their city and at least three of the players' names, but that won't get you far at the office water cooler. As usual, I caught up with my buddy Brent to get his take on the subject.

BRET: OK, so we enjoy watching the games, but we don't "follow" the sport per se. How do we still hang on to our man cards?

BRENT: It's not easy, but it can be done, if you know the basic rules. My first Superbowl party, somebody asked me what I thought the next play should be. I panicked and said the quarterback should steal third.

BRET: Ouch. That's when they hand you a wine cooler and make you go watch cartoons.

BRENT: "Ren and Stimpy" is more interesting, anyway. But I did learn a lesson in deflection.

BRET: Is that when the one guy tries to tackle the other guy but just bounces off?

BRENT: You've had a wine cooler or two in your day as well, haven't you?

BRENT: By deflection, I mean you deflect the focus of the conversation.

BRET: Sounds good. How does it work?

BRENT: It's pretty simple, really. You just have a few topics in your back pocket that are likely to change the course of the discussion.

BRENT: Such as Brett Favre. Specifically, whether or not he's going to retire/unretire, depending at what point in the season/off-season it is.

BRENT: Sure is—reliable, too. This has been a guaranteed conversational spark plug for years now, and as long as he's able to retain his godlike powers of recovery and athleticism, his employment status can be a red herring for guys like us for years to come. Plus, anytime his name comes up, you get the chance to quote the best-delivered movie quote in cinematic history.

BRENT: That's the one. We may be pigskin pinheads, but we know our Farrelly brothers.

BRET: Amen. Now give me another one.

BRENT: Sure thing. Football players—both college and professional—have a tendency to make headlines off the field at least as often as they do on the field, and not always in a good way. Pick one or two players, memorize their rap sheets, and toss their names out the next time you feel cornered in a gridiron conversation.

BRET: I can do that! My hometown quarterback Ben Roethlisberger has had plenty of "incidents."

BRENT: That's an understatement. Roethlisberger is a gold mine. The next time someone asks you to compare coverage schemes, just say something like, "Horrific motorcycle accident, alleged assault charges in multiple states ... What's Roethlisberger gonna get in trouble for riding this season?"

BRENT: Harsh, but effective. And finally, you've got the go-to line that always seems to work. "I don't know, but they can't be any worse than the Dolphins."

BRET: Yep. I've used that one myself many times.

BRENT: Of course, these are all just last resorts. If you have a good entrance and exit strategy, you'll never need them.

BRENT: Since we live in Mississippi, we only need one. Step one: When entering a football conversation, just yell—the more loudly and obnoxiously the better—"Who Dat?" Step two: Leave the actual discussion to people who know what they are talking about and simply smile and nod. And finally, when leaving, repeat step one, and just hope with all your hoping muscles that no one asks you anything about a specific player.

BRET: Yeah, things get tricky when they start asking for specifics, but there are ways to get around that. For instance, you don't have to know every fact about every player, just a couple of impressive facts about a couple of background players and steer the conversation toward them. So Brent, think trading Polamalu was a good call?

BRENT: Maybe, but getting back fourth-string running back Willie Parker should be their primary focus.

BRENT: How about when they ask about specific historic games? You know, the ones every "true fan" should have seen?

BRET: OK, so let's give this a road test. Guy asks you what you thought of last night's game. You then ... ?

BRENT: Deflect to a more familiar topic, bad-mouth the Dolphins, and quote "You're the only one who takes me seriously, Pete."

BRET: Touchdown! He then asks whether Drew Brees called the right play. You answer ... ?

BRENT: The shotgun formation definitely gave him a leg up, but he deserved that yellow card when he double dribbled all over that royal flush. He totally earned the penalty box on that one.

BRET: Here. Have a wine cooler.

Football is just an excuse to drink more beer.