It's a College Town 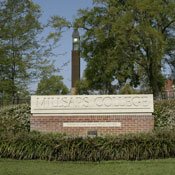 Everyone remembers freshman days filled with new faces and being constantly lost. As much as you wanted to call your mom, your pride just wouldn't let you after an entire summer of saying, "I cannot wait to move out." Everyone seems to know secrets that you're missing out on. Don't be left out of the loop any longer. Here are some facts about Jackson's local colleges and universities that even the professors may not know.

Belhaven University
1500 Peachtree St., 601-968-5940
http://www.belhaven.edu
• Mascot: Blazers
• Colors: Forest green and Vegas gold
• The newspaper is called the Quarter Tone Paper
• Belhaven has one of the best college dance programs in the state.
• The school motto is Non Ministari Sed Ministare: Not To Be Served, But To Serve.
• Belhaven was chartered in 1894 as a privately owned institution. In 1911 Belhaven was merged with McComb Female Institute and, in 1939, merged with the Mississippi Synodical College.

Jackson State University
1400 Lynch St., 601- 979-2121
http://www.jsums.edu
• Mascot: Tiger
• Colors: Navy blue and white
• The university has taken its news electronic with the media publication Blue and White Flash.
• The "Horseshoe" is where plaza parties are held and where sororities and fraternities step.
• Many businesses in Jackson accept the Jackson State Super Card, This program permits students, faculty, and staff with funds available in their accounts to use their student/work I.D. to purchase goods and services from participating merchants.

Mississippi College
200 W. College St., Clinton, 601-925-3000
http://mc.edu
• Mascot: Choctaws
• Colors: Blue and Gold
• MC is a private, co-educational Christian university of liberal arts and sciences.
• Founded in 1826, Mississippi College is the oldest institution of higher learning in the state of Mississippi and second oldest Baptist university in the nation.
• The college has two restaurants: Sky Ranch, fast-food; and Jazzman's, a café.
• Boys and girls cannot be in each other's dorms on Sundays and Wednesdays.

Tougaloo College
500 W. County Line Road, Tougaloo, 601-977-7700
http://www.tougaloo.edu
• Mascot: Bulldog
• Colors: Blue and scarlet
• The school newspaper is called The Tougaloo Harambee.
• Mission Involvement and Wednesday Chapels are mandatory and a big part of student's final grade.
• Woodworth Chapel, built in 1901, is historically significant and an architecture award winner.
• The freshmen dorms are color coded and separated by numbers such as House 1-5, up and downstairs.
• The campus is rumored to be haunted because of the cemetery on the yard.
• There are more than eight places to dine on campus including the café, the Double Treat bakery and Trattoria, an Italian eatery.

University of Mississippi Medical Center
2500 N. State St., 601-984-1000
http://www.umc.edu
• UMMC encompasses six health-science schools: medicine, nursing, dentistry, health related professions, graduate studies and pharmacy.
• UMMC is one of the largest employers in Mississippi. The Medical Center has a $1.3 billion annual budget.
• The Medical Center opened in 1955, but its beginnings date to 1903 when a two-year medical school was established on the school's parent campus in Oxford.
• The institution's primary functions are the creation, dissemination, and application of knowledge through a variety of undergraduate, graduate and professional programs and public service activities.

Hinds Community College
Multiple locations; e-mail [e-mail missing], or call 1-800-HINDS CC
http://www.hindscc.edu
• Mascot: Eagles
• Colors: Burgundy and white
• Hinds has one of the best nursing programs and the biggest junior-college campus in the state.
• The school offers more than 141 programs including academic, technical and career courses.
• With the 2 Plus 2 programs, Hinds offers some junior and senior-level courses transferrable to four-year colleges and universities.