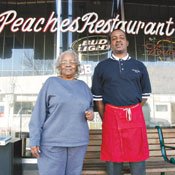 Are you tired of breaking the bank for lunch when you can't make it home? We've listed a few favorite restaurants around town where you can eat for under $10 along with some popular dishes.

Cool Al's
4654 McWillie Drive, 601-713-3020
According to the "Best of Jackson 2010" voters, Cool Al's has the best burger, best fries and best veggie burger in town. With choices ranging from Sinbad's BBQ Bacon Burger to the West African Veggie Burger, there's a burger for everyone, and they're all under $10

La Cazuela Mexican Grill
1401 E. Fortification St., 601-353-3014
La Cazuela is a local favorite, voted Best Mexican Restaurant in the Best of Jackson 2010 issue that offers a menu full of lunch specials, including enchiladas and tacos all for less than $10.

Mayflower Café
123 W. Capitol St., 601-355-4122
Voted to have the "Best Seafood" in the "Best of Jackson 2010" issue, the Mayflower Café is a historical Jackson staple with great southern food. They offer hot plate specials for lunch that change daily but always cost just $8.95, including tax and tea.

Newk's Express Cafe
4450 Interstate 55 N., 601-709-4990 and locations in Flowood, Ridgeland and Brandon
Newk's Express Café offers a wide selection of gourmet pizzas, salads, soups and toasted sandwiches. Voted to have the "Best Meals Under $10" in the Best of Jackson 2010 issue, all pizzas, sandwiches, and soups come in under $10, with just one salad costing mere cents over $10.

Pizza Shack
1220 N. State St., 601-352-2001
Pizza Shack is not an ordinary pizza joint. While they have the classics like pepperoni and sausage, they also have tons of exotic pizzas like the Cajun Joe with andoullie sausage and the Thai Chicken with a Thai peanut sauce. All small pizzas cost less than $10, as do all their sandwiches and salads.

Hammontree's R.J. Barrel & Co.
111 North Union St., Canton, 601-667-3518
Hammontree's is in the Canton Square and serves salads, strombolis, pizza and sandwiches. All of the bread, pizza crust and cinnamon rolls are homemade and delicious.

Their pizza by the slice special available Tuesday-Friday 11a.m. to 2:30 p.m. includes a slice of one of the pizzas of the day and a choice of greens, salad or soup for $5.50.

Tony's Tamales
230 W. Woodrow Wilson Ave., 601-366-9591
Tony's Tamales has delicious southern food at an affordable price. The best part is you never have to leave your car, thanks to their convenient drive-thru window. Of course they have tamales that are $8.26 a dozen but they've got plenty of other options as well, including Philly Cheese Steaks, Red Beans and Rice with sausage, Gumbo, Hot Dogs, Burgers, and Nachos all for well under $10.