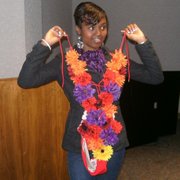 In an effort to make a positive change on campus and around the community, Go Green JSU week at Jackson State University runs through Thursday, Oct. 29. "Going Green: It's Up to JS'U'" is a service learning project of the Department of Mass Communications at the university.

"Go Green JSU week gives students, faculty, staff and the community the opportunity to hone what it means to go green," said Amber N. Thomas, founding chairwoman of the Student Government Association's Blue, White and Green Committee. The idea for the project came about in spring 2009. The public-relations practice class created a campaign for going green, which won a fifth place award in the "Going Green Mississippi" contest from local TV station, WLBT.

The class joined with the Department of Facilities and Construction Management and the SGA's Blue, White and Green Committee to plan activities for the week. Monday was "Wipe out the Waste Day," when different groups around the university helped clean up the campus.

Tonight, Oct. 27, at 6 p.m., is the Gorgeously Green Fashion Show, featuring JSU's Insatiable Modeling Squad and held in the general-purpose room on the second floor of Jacob L. Reddix Hall.

"I think it's great that we can come together and model for something with a purpose," said Marrisa Simms, a member of the squad and a Jackson native. "This fashion show allows the students to see it's acceptable to be responsible to our environment."

The modeled clothes are made out of various recyclable materials ranging from garbage bags to old issues of the Jackson Free Press, as well as repurposed donated clothes.

"The purpose of the fashion show is to be a fun event promoting our message of recycling and being environmentally conscious," public-relations practice class instructor Riva Brown Teague said. Admission is free, but organizers are encouraging attendees to bring clothes and other recyclable items to be donated to Goodwill, the Salvation Army or to a women's shelter.

On Wednesday, Oct. 28, the JSU Student Center will host an art exhibit from Blackburn Middle School students. JSU Art Department staff will judge the art, which is made from recycled and recyclable materials.

"The art exhibit is part of the university's attempt to reach out into the community and to get the younger generation to think about recycling" Teague said.

On Thursday, Oct. 29, JSU celebrates Arbor Day beginning at noon at the Gibbs-Green Plaza. This year's activities are a continuation of the last year's tree plantings, which earned the university the designation of Tree Campus USA from the Arbor Day Foundation. In February, JSU became one of 29 college campuses in the nation and the first among Historically Black Colleges and Universities to earn the designation for 2008.

"I've heard that there is a great buzz on campus (about Go Green Week)," Teague said. "Students, faculty and staff are really looking forward to coming to the fashion show."