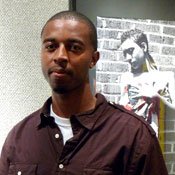 Artist and photographer George Miles will showcase his work during "The Bridge" art exhibit at JSU through Nov. 10.

"The Bridge," an art exhibit at Jackson State University, features numerous local artists such as Chelsea Sekanic, Samuel McCain, Shambe, Nathan Bruce, Lacy and Kimberly Jacobs. They are "vibrant, imaginative and diverse," said McCain, a local painter, during the exhibit's opening last week. The artists express their own point of view through paintings, drawings, photography and wood work.

The pieces bring back memories of childhood through simplicity and colorful depiction. One artist in particular, George Miles Jr., photographed one of our country's most important emblems: the American flag. When Miles was younger, his uncle passed away and was given a military-style funeral. His grandmother received a flag afterward in his memory.

"The flag represents freedom and is a constant reminder of my uncle. I didn't get to know him that well while he was living. Pictures of him with the flag in the background were all I had when he died," Miles told the Jackson Free Press.

Miles' is preparing a solo exhibit at the gallery entitled "No Frame, No Glass," to be showcased in 2010.

The title of the art show "The Bridge," represents the power of art to bridge differences and points of view.

"The artists' work is from the heart and is created in hopes of catching a viewer's eye and eventually captivating their heart," Miles said.

The artists' work reflects personality and style. The bridge they are building through art creates a deeper awareness of beauty and interpretation.