'On That Train and Gone,' The Scramblers | Jackson Free Press | Jackson, MS

'On That Train and Gone,' The Scramblers 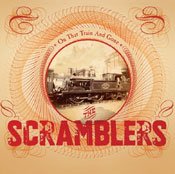 The Scramblers will release their new album, "On That Train and Gone" Oct. 10 at Underground 119 at 9 p.m.

Traditional folk music was once played on back porches, at barn dances and in parlors throughout small-town Mississippi but was nearly lost in recent years. The Scramblers are bringing some of these tunes back to life. In their debut album "On That Train and Gone," the five-piece Americana string band creatively concocts an eclectic mix of blues, folk and hill-country tunes.

In the opening song, "Elzic's Farewell," the Scramblers capture the raw energy of West Virginia old-timey mountain tunes. The band shifts easily into high-energy bluegrass for the Kentucky tune "Glory at the Meeting House," then adds a taste of East Texas blues in "Two White Horses" and "Rueben's Blues" as vocalist Valley Magee sings this seductive tune. Because much of Mississippi hill-country music of the 1920s and '30s is peppered with blues inflexion, the band instinctively includes legendary Mississippi bluesman Robert Johnson's original "They're Red Hot" and Charlie McCoy's lively tune "Lonesome Train Took My Baby." No Mississippi old-timey ensemble is complete without hometown originals such as "My Little Doney." "Tater Patch" and "Going Up to Hamburg."

The Scramblers make their way into Mississippi music history with this fun, fresh album and successfully deliver with three original tunes written by band member Jamie Weems. The Cedars art gallery, an 1840s antebellum structure on Old Canton Road in Jackson inspired the Cedars: "Ruby's Polka," named after band members Jack and Valley Magee's daughter Ruby. When asked about "Broccoli for Breakfast," Weems recalls showing up at the Magees' home one Sunday morning looking forward to an ole-fashioned country breakfast and instead found everyone eating broccoli. "Something colorful and vibrant about these songs allows Mississippians to take pride and embrace this music as their own," Weems says.