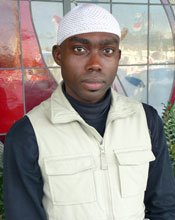 Ivory Harris remembers the Northwest Jackson neighborhood of Presidential Hills where he grew up as a "living, breathing community." As a student, a teacher and a public servant, Harris has never strayed far.

Harris, 39, is now a patrol officer in Precinct 3, covering the area where he grew up. He also teaches capoeira, a Brazilian martial art, three days a week at Quest Fitness Club on Lakeover Drive

He graduated from Tougaloo College in 1994 with a degree in philosophy and religion, which may explain his speaking stylesoft and deliberate, peppered with aphorisms.

The officer began studying martial arts in his early 20s. He started with hybrid self-defense styles like jeet kune do, but a revelation from his first teacher changed his course.

"When the student is ready, the master will appear," Harris says.

Harris studied with his first teacher, Bob Williams, for several years before Williams revealed movements from capoeira, a form that fuses martial-arts movements with songs and dance descended from African slave culture.

Williams introduced him to Curtis Pierre, a New Orleans-based master with whom Harris has studied since 1994. Harris still travels to New Orleans twice a month, for two or three days at a time, to learn songs, dances and movements from Pierre, which he then teaches to his own students.

"Once I'm back, I have to pass down how the movement goes and how the song goes," Harris says. "It's like the concept of ants: The soldiers will go out, come back and feed the colony."

Harris joined the Jackson Police Department a year after his graduation, but left JPD in 2001 to teach capoeira at the Farish Street YMCA. Although he left that program in 2004, he still runs into former students.

"It's heartwarming to know that the teachings of capoeiranot the techniques themselves, but the philosophycarried them on into adulthood," Harris says.

Harris returned to JPD as a patrol officer in 2007. A recent tragic event gave Harris more perspective on his law enforcement job. On Sept. 15, Harris' apartment caught fire. He lost nearly all his possessions, including a beloved pet Chihuahua, a guinea pig and African artifacts.

"I believe I had to experience that in order to make me a better police officer, to make me more humble," Harris says. "Seeing grief or despair and experiencing it are two different things."

A month after his own fire, Harris was on patrol when he received a call about a house fire. Like him, the owner had lost everything, and Harris knew he had to comfort her.

"I arrived on scenetook a couple deep breathsgot out and did what I was trained to do," Harris says.